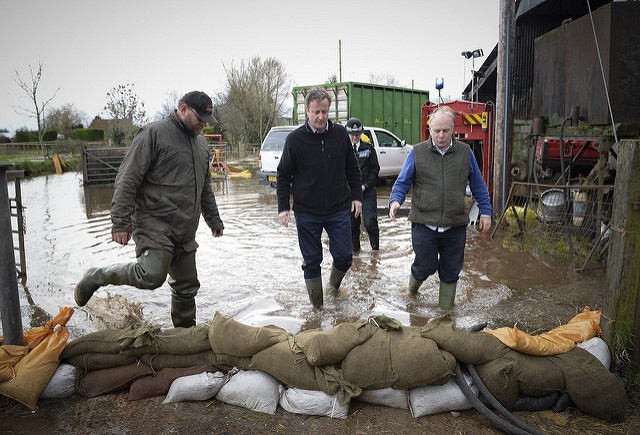 The event was not unprecedented, but damage was significant. The flooding led to £451 million insured losses in southern England. Whether anthropogenic climate change contributed to this event was much discussed at the time: British Prime Minister David Cameron told Parliament ‘I very much suspect that it is’.

Cameron’s suspicion has been assessed: a range of model simulations has been conducted and observations have been analyzed to estimate anthropogenic influence on the risk of experiencing such atmospheric flow and precipitation. Both thermodynamic and dynamic effects are important. Thermodynamic effects refer to the fact that a warmer atmosphere holds more water vapour, causing an increase in risk of heavy winter rainfall. The dynamic effects refer to anthropogenic forcings altering the probability of occurrence of the atmospheric circulation that favoured the winter 2013/2014 conditions.

The assessment showed that human influence indeed increased the risk of low-pressure northwest of Britain and the number of days with low-pressure systems moving in from the Atlantic. Human influence increased the risk of heavy precipitation in southern England. This increased the chance of extreme flows for the River Thames over several weeks. The assessment further indicated that although thermodynamic effects cause most of the increase in precipitation, around one-third is caused by changes in circulation. The results are highly uncertain, however. David Cameron was right to ‘suspect’ a human influence on the 2013/2014 winter flooding. The uncertainties do not allow for firmer statements than ‘a suspicion’, however.