What are the world’s hotspots of climate change-enhanced conflict risk? 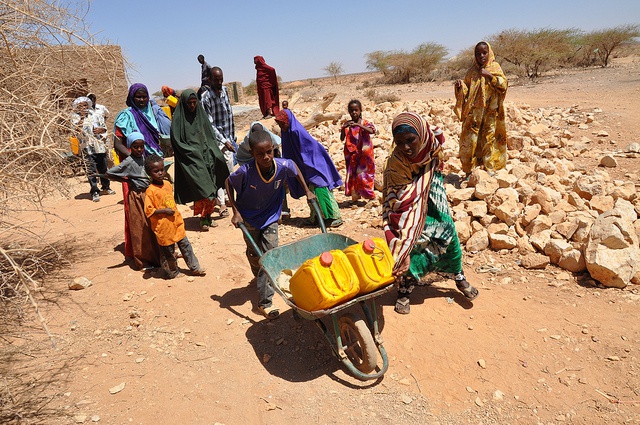 Some say the conflict in Syria illustrates where climate change may lead to in water-stressed regions of the world: water shortage causes food insecurity, that in turn leads to social insecurity and instability. Others question this and state that conflicts are too easily related to climate change and that climate-induced scarcity is not the dominant mechanism of conflicts. The views on the impact of climate change on conflicts in published research are mixed. Clearly, more research is needed to gain insight in the causal relationship between climate change and conflict risk. Karen Meijer (Deltares) studies this highly relevant issue and presented the results of a first ‘quick assessment’ on the Adaptation Futures Conference.

Risk is determined by hazard, vulnerability and exposure. The scale of a drought hazard is the regional water shortage: the difference between water supply and demand. The exposure and vulnerability of people in a certain region depend on a number of variables that can be combined into a measure for exposure and vulnerability, respectively. Exposure to a drought hazard, for instance, depends on a combination of people’s poverty, inequality, and their dependence on agriculture. This information can be inferred from global datasets. Karen’s resulting conflict risk map shows that most of the hotspots are in (Sub-Saharan) Africa and Asia.

Not only farmers, but also citizens are affected through higher food prices. The effects may be cross-boundary. The higher wheat prices Egypt was confronted with due to the Russian heat wave in 2010, for instance, have been related to the turmoil there. ‘But it’s not just drought or climate change’, Karen stressed, ‘it’s also factors such as ineffective government and being highly dependent on food trade.’

Karen presented a map of conflict risk change between now and 2040-2060 under worst-case scenarios of climate change and socio-economic developments. Remarkably, under these scenarios the situation may improve for large parts of Africa due to more rainfall and less water scarcity. ‘Moderate scenarios of climate change give similar results’, Karen added. ‘However, the outcomes of this study depend on the indicators you choose to characterize hazard, vulnerability and exposure. By choosing other indicators, you may get somewhat different results. This is one of the things we will look into.’