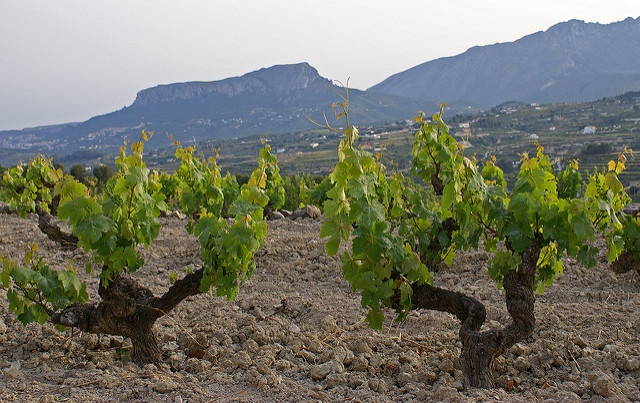 Premium-quality wine areas in Europe are at risk due to climate change. In the north of Spain climate change probably results in an overall shift towards higher yields of lower-quality fruit, resulting in lower-quality and lower-priced wines. In central and southern Spain more irrigation will be needed to compensate for heat stress increase and to avoid quality losses. This will increase already existing conflicts in water allocation.

In this assessment Spain was divided into four major agro-climatic regions:

In the northwest, areas at higher altitudes surrounding the Pyrenees in the north and the Iberian mountains in the south may become suitable for viticulture. On the one hand, reduction of frost occurrence may favor optimal ripening. On the other, higher night temperatures during ripening period might reduce wine color and aromas potential. The need for irrigation may increase in the dryer regions. Other adaptation measures that may be necessary are the introduction of later varieties or rootstocks changes.

A temperate Mediterranean climate region, mainly along the Ebro valley; this region produces many of the premium-quality wines (e.g. Rioja).

In the northeast, viticulture may become possible in areas that are too cool at present. A reduction of precipitation, indicated by some of the models, might increase wine quality and reduce humidity-nurtured diseases such as mildew. Only in some cases, irrigation might be necessary.

An area with a very pronounced dry and hot season; the region produces major exports and some new premium wines.

In central Spain, conditions may improve for some grape varieties as a result of frost reduction and better ripening, whereas growing seasons may become too warm for other varieties that loose color and aromas potential. Irrigation is already practiced in 40% of the vineyards of Central Spain and may need to be expanded, thus increasing already existing conflicts in water allocation.

In the southern Mediterranean area projected warming trends show potential increments of heat stress and quality losses. Water availability will probably become the most limiting factor in the future as water needs are expected to rise and more irrigation will be needed to prevent severe drought and heat stress.

A consistent result in all regions is the need for additional water for irrigation in order to ensure stable production targets and minimize the risk of drought damage. It is highly questionable whether this can be achieved since current water policy in Europe limits additional irrigation infrastructure.

The results indicate that premium-quality wine areas in Europe are at risk. In fact, actual risk may even be higher since the changes of extreme temperatures, not considered in this assessment, may have a more extreme effect on wine quality and may call for even more irrigation.On the other hand, some regions where there are cultivated grape varieties with a greater plasticity than others might not need as much adaptation.