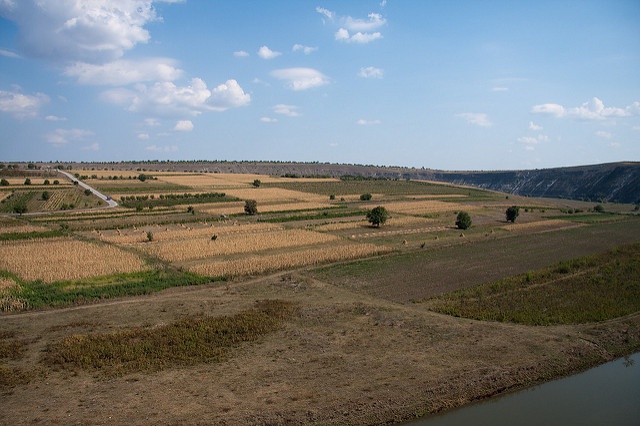 Droughts are a major problem for the Republic of Moldova: since the 1980s, droughts increased in intensity and persistence compared to the past, mostly due to increased temperatures and decreased precipitation in the region. Especially the south of Moldova is vulnerable to droughts. The extreme droughts in 2007 and 2012 sharply reduced agricultural production: in 2007 and 2012, the production of winter wheat dropped by 50 and 38%, of maize by 67 and 46%, of sunflower by 54 and 27%, and of sugar beet by 23 and 23%, respectively.

Only 13% of the arable land in Moldova is irrigated. Irrigation is difficult because of inappropriate water quality and the need for pumping, making irrigation too expensive. As a consequence, the costs of irrigation often exceed its potential benefits. This makes the agriculture sector highly dependent on natural precipitation. Moldova could serve as a model example of a non-irrigated crop response to the increasing drought tendency in southeastern Europe.

The risk of overwintering and summer crops in Moldova being exposed to severe drought during their growing cycle is increasing. This is an immediate and fundamental problem, because the majority of the rural population depends either directly or indirectly on agriculture for their livelihoods.

Time series of averaged crop yields in Moldova emphasize an increasing trend from 1962 to 1981 due to intensive agriculture, and a decreasing trend from 1985 to 2012 due to drought, heat stress, evapotranspiration intensification, reduced soil fertility, and sharp economic changes. Stagnating cereal yields in eastern European countries have been attributed to lower yields under higher frequency of droughts, heat stress, and the short duration of the grain-filling period, but changes in management may also have played a role. In almost all eastern European countries, crop yields also dropped as a result of sudden decrease of nitrogenous fertilization after 1990 due to short-term economic impact.