Flood peaks of Europe’s rivers will increase, unless driven by snowmelt 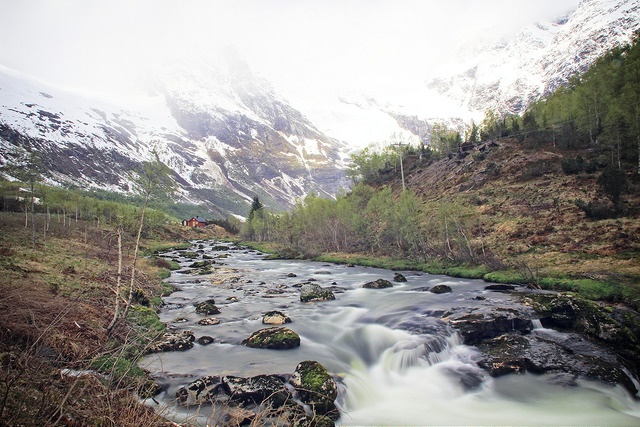 The timing of peak river flows varies from one catchment to another because flows are not generated the same way in different catchments. In many catchments precipitation is dominated by rainfall in winter and extreme flows typically occur in winter. In other catchments snow accumulates in winter months and extreme flows are dominated by snowmelt and occur in spring. A third category represents catchments where both rainfall and snowmelt are important constituents of extreme river flow. Along with the timing of extreme flows, also the peaks of these flows and the total volume of the flood waves over a number of days vary from one catchment to another.

It is to be expected that extreme flows also change differently under climate change, depending on how the ratio between rainfall and snow will change.

Projections of changes in peak river flows and flood wave volumes were made for catchments in different parts of Europe, varying from snow-dominated catchments in Norway, rain-dominated catchments in Belgium and Denmark, and German and Polish catchments with mixed flood regimes driven by rainfall in winter and snowmelt in spring. In total 11 catchments in 9 countries were studied, covering Europe from Norway to Cyprus. Projections were made for the period 2071 – 2100, compared with 1961 – 1990, under a moderate scenario of climate change. In this study peak flows were defined as floods that occur on average once every year to once every 5 years.

The results indicate that extreme flows generally increase by the end of the 21st century in catchments with rainfall-dominated flood regimes, consistent with projected changes of more extreme precipitation in winter. In Mediterranean catchments such as the studied one in Cyprus, however, extreme winter precipitation and extreme flows decrease.

In catchments with spring floods caused by snowmelt a decrease of extreme flows is projected because less snow accumulates in winter and snowmelt starts earlier. An exception are high northerly mountain catchments in which snowmelt is expected to continue to be important in the future, whilst increases in extreme precipitation during and following the snowmelt season will contribute to an increase in the flood hazard.

In catchments with mixed flood regimes, the extreme flows are expected to increase, suggesting that in those catchments the increase in extreme precipitation dominates over the reduction of snowmelt and that the flood regime shifts towards a rainfall-dominated flood regime.