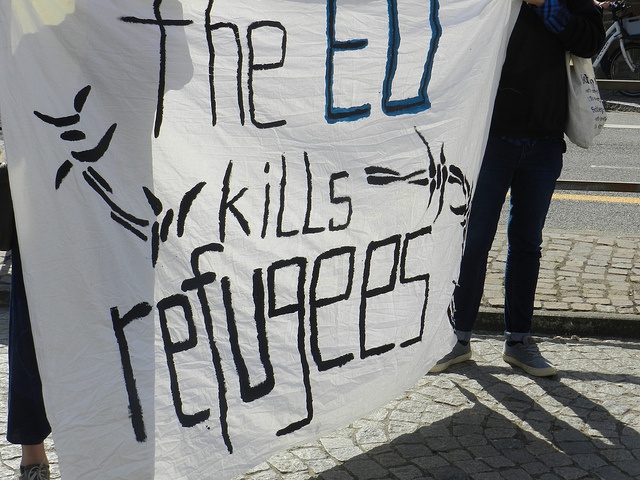 In what way is Europe’s security related to climate change?

Europe is surrounded by some of the most vulnerable regions to climate change, e.g. North Africa and the Middle East. Migratory pressure at the European Union's borders and political instability and conflicts could increase in the future. This was stressed in a paper of the European Commission published in 2008 on all risks driven by climate change and related in one way or another to security issues. Little did they know that only 8 years later these risks would be so manifest already.

In the EU paper seven topics were mentioned that more or less cover these risks. Many authors and organizations, including the United Nations Secretary-General, the IPCC, the G7 members, and the U.S. National Intelligence Council have also stressed these topics, or some of them. These 7 topics seem to cover the major issues of security related to climate change. They are not isolated from each other but interact in complex ways.

In the summary of climate change related risks below the 7 topics of the European Commission were taken as a starting point, and completed with topics stressed by all these other organizations and researchers.

Shortage of water, reduction of agricultural land, increased flooding and longer droughts may lead to economic losses and increased food prices. The overall effect is that climate change will fuel existing conflicts over depleting resources, especially where access to those resources is politicised.

Parts of the world are already particularly vulnerable to climate-induced decline in food production and degradation of freshwater resources. Hundreds of millions of people worldwide are currently undernourished and/or without access to safe drinking water. This situation is likely to worsen in the future as a result of climate change, due to a drop in agricultural productivity, desertification, soil salinization and water scarcity. At the same time, demand is increasing in areas with growing populations and rapid economic development.

In their 2015 report A new climate for peace the G7 members also presented 7 ‘climate-fragility risks’ that largely, but not completely, cover the 7 risk topics stressed by the European Commission. In addition to the EU topic Conflicts over diminished resources they explicitly mention the risks of Extreme weather events and disasters, Volatile food prices and provision, and Transboundary water management.

Mega-cities, with their supporting infrastructure, such as port facilities and oil refineries, are often located by the sea or in river deltas. Sea-level rise and the increase in the frequency and intensity of natural disasters pose a serious threat to these regions and their economic prospects. The risk of natural disasters occurring in many cities and industrial regions in coastal zones will be further amplified by deforestation along the upper reaches of rivers, land subsidence in large urban areas and the ever greater spatial concentration of populations and assets. The East coasts of China and India as well as the Caribbean region and Central America would be particularly affected. An increase in disasters and humanitarian crises will lead to immense pressure on the resources of donor countries, including capacities for emergency relief operations.

Receding coastlines and submergence of large areas could result in loss of territory, including entire countries such as small island states. A further dimension of competition for energy resources lies in potential conflict over resources in Polar Regions, which will become exploitable as a consequence of global warming. Desertification could trigger a vicious circle of degradation, migration and conflicts over territory and borders that threatens the political stability of countries and regions.

Topic 5. Situations of fragility and radicalization

Climate change may significantly increase instability in weak or failing states by over-stretching the already limited capacity of governments to respond effectively to the challenges they face.

Intensified competition over access to, and control over, energy resources is, and will continue to be, a cause of instability. There is a possibility of greater energy insecurity and greater competition for resources. As previously inaccessible regions open up due to the effects of climate change, the scramble for resources will intensify.

Climate change impacts will fuel the politics of resentment between those most responsible for climate change and those most affected by it. Impacts of climate mitigation policies (or policy failures) will thus drive political tension nationally and internationally.

One of the risks mentioned by the G7 members is unintended effects of climate policies, referring to well-intentioned climate change policies that could undermine economic development, contribute to political instability, and exacerbate human insecurity.

In a recent report the US National Intelligence Council discriminates between the current situation, the situation in the next five years, and the next 20 years:

Looking forward, we assess that during the next five years national security risks linked to climate change will arise mostly from distinct extreme weather events, especially in regions with weak governance, poor living conditions, or persistent conflict that limit the capacity of governments and societies to cope with additional stress. When extreme events occur where they have not before, that too will be disruptive, even for advanced industrial countries.

We assess that during the next 20 years—in addition to increasingly disruptive extreme weather events—climate change effects will play out in broader, systemic ways, such as more acidic oceans, degraded soil and air quality, and rising sea levels, resulting in sustained direct and indirect effects on US national security. Weather events of modest severity will be disruptive when their impacts are compounded as part of a rapid sequence or in clusters.”