Projections of climate change impacts on floods and droughts in Germany 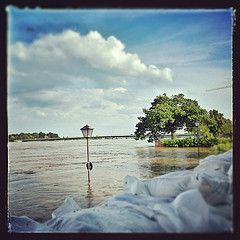 Flood and drought conditions in five large river basins in Germany (covering 90 % of the German territory) were estimated from a large number of (regional climate) model projections (based on several models and the A1B emission scenario of moderate climate change). The results for 2061–2100 (compared with 1961–2000) show that many German rivers may experience higher 50-year floods and more frequent occurrences of current 50-year droughts with a moderate agreement by 60–70 % of projections. The results show very large differences between the projected changes for different model projections, however. The uncertainty of the extreme event projections is too large to identify the robust change signals for most German rivers.

Robust changing signals agreed by more than 80 % of projections include an increasing trend of floods in the Elbe basin and more frequent extreme droughts in the Rhine basin in 2061–2100. Besides, wetter conditions with higher risk of floods and less frequent droughts are projected for the rivers flowing from the Alps (particularly the Inn River) in the near future (2021–2060). The current 50-year droughts may occur more often with a frequency of <25 years along the Rhine River and its tributary Moselle over the last 40 years of this century. The major trigger of the significantly drier conditions in the Rhine is the significant decrease in summer precipitation (about 13 %).