Human and climate impacts on the 21st century hydrological drought 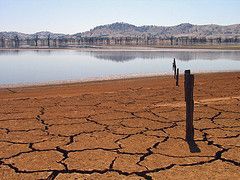 The impact of human water use and climate change on future low flows and associated hydrological drought has been assessed on a global scale for 1971–2099 (based on climate projections from five general circulation models (GCMs) and four RCP emission scenarios). In this assessment low flow is defined as the discharge that is equalled or exceeded 90% of the time, and human water use includes irrigation and reservoir regulation, but excludes industrial and domestic water use. No future changes in population and land use were included.

The results show that climate change has a negative impact on the low flow regime (decrease of 10% or more) in South-America, Australia, Southern-Africa, Southeast Asia and the Mediterranean, for all four emission scenarios. Positive impacts on the low flow regime are found in Northwest Africa and large parts of Northern Europe, Russia and Canada.

According to the results of this assessment human influence can account for almost 100% of the changes in future hydrological drought in areas such as Asia, Middle East and North-Africa (Mediterranean). These areas are heavily impacted by water abstraction and reservoirs are not enough to compensate for this. In these regions low flows are expected to be even lower in future and droughts will likely become more severe.

The increased drought vulnerability as a direct result of human water abstraction can be compensated by reservoirs. Reservoirs retain the water for some time and thus lead to a smoothed hydrograph, with lower peak flows and higher low flows. This is especially the case for large parts of the United States and Europe, where the number of reservoirs is large.