Extreme rainfall intensity and erosivity increases in the Mediterranean region 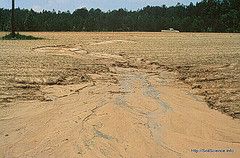 Parts of Tuscany, Italy, are highly vulnerable to erosion. Soil erosion depends on rainfall intensity and duration, land cover, and slope and soil physical parameters, such as texture, moisture and aggregation. Storm events area characterized by very high rainfall intensity and may have a huge impact on soil erosion risk. A local increase in the frequency or intensity of extreme rainfall events may therefore result in further soil degradation. Soil texture in Tuscany is clay loam, sandy loam and loamy sand. It was shown that extreme rainfall intensity (per hour and per minute) during the period 1989–2010 increased especially for the winter, followed by spring for the coastal area and autumn for the inland area. These results agree with those of other studies for Tuscany, Sicily and Spain.

The likely climate-change driven increase in rainfall erosivity could have strong adverse effects for the study area and potentially for a larger area of the Mediterranean, such as an exacerbated soil degradation and transfer of sediments, nutrients and contaminants into the water table.

Soil exposure to rainfall is especially high in autumn, since the majority of fields are ploughed and sown with cold season cereals or left fallow. Erosion vulnerability may be reduced by a number of soil protection measures: