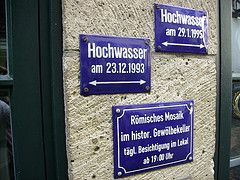 For individual German river reaches, the impact of climate change on flood damages was quantified for the time horizons 2041–2070 and 2071–2100, and compared with the reference period 1961–2000. In this study no changes in land use (e.g., riverine settlements), water management (e.g., flood protection), and value of assets were considered.

According to these results, the total annual flood damages in Germany sum up to nearly EUR 500 million per year for the reference period 1961–2000 and, on average, double until the end of the scenario period (2071-2100). In fact, total economic losses can be higher than the damages on buildings and small enterprises considered in this study. The projected increase of flood losses is in line with the ones according to other studies for the European scale and for the Rhine basin.