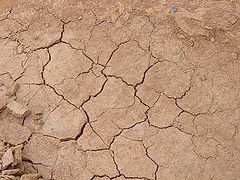 Globally, both precipitation and evapotranspiration (= physical evaporation plus biological transpiration) are expected to increase with warming. The combined effect has been projected (with a number of General Circulation Models) for the end of the 21st century for a high-end climate change scenario (the RCP8.5 scenario). The relative contributions from projected changes in moisture supply (precipitation) versus evaporative demand determine whether droughts will become more severe in the future and will cover wider areas.

The projected climate changes suggest increased drying, driven primarily by increases in (potential) evapotranspiration. This will likely have significant ramifications for globally important regions of agricultural production in the Northern Hemisphere mid-latitudes, including Europe. The percentage of global land area projected to experience at least moderate drying by the end of the 21st century may increase from 12 to 30 %.