Climate change-induced shifts of the growing season in Germany 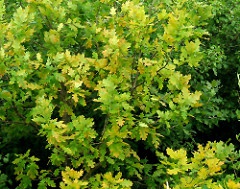 During recent decades, climate change-induced shifts of the growing season in Germany have been observed. An analyses of data over the period 1961 – 2010 showed that the beginning of leaf unfolding of common horse chestnut and the date on which goose-berry fruits are ripe for picking have advanced 4.7 and 6.2 per degree K warming, respectively. The beginning of leaf colouring of common oak was delayed by 2.2 days per degree K warming.