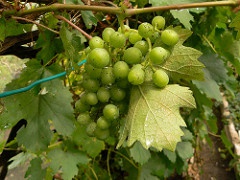 Due to changed climatic conditions during 1971–2010 the transboundary area of western Poland, eastern Germany and the northern part of the Czech Republic is now suitable for the cultivation of wine grapes, even for varieties that are demanding in terms of accumulated heat.

The accumulated heat can be described as

In the transboundary area of Poland, Germany and the Czech Republic SAT and GDD values show statistically significant positive trends during 1971–2010. The observed climate change in the region reduces the risk for wine grapes cultivation and increases the area suitable for more demanding grape varieties.