Vineyard soil erosion under climate change in the Mediterranean 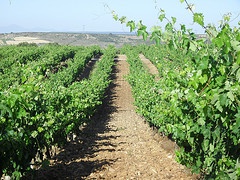 Does climate change affect the erosion of vineyard soils in the Mediterranean? Recent results for a Spanish study area (a basin about 40 km northwest of Barcelona) show that year-to-year variability in observed erosion rates is too high to come up with a clear answer to this question. The study area is representative of erosion rates in vineyards in the Mediterranean area. The results do not allow accurate predictions of the influence of climate change on soil erosion in the Mediterranean area. It is an important issue, however: estimations carried out in the study area indicate that soil losses in vineyards represent about 9 % of income from grape sales.

Longer dry periods and greater rainfall concentration in a reduced number of events of higher intensity may affect the risk of erosion. More extensive droughts can remove the protective vegetation cover, leaving the soil more exposed to erosion, while more intensive rains can detach more soil and produce a severe increase in erosion rates.  Thus, it may be expected that changes in temperature (through evaporation rates) and precipitation affect erosion rates.

Therefore, projections of temperature and precipitation have been made for 2020, 2050 and 2080 under a scenario of relatively strong climate change (the high end A2 scenario). Climate data for the period 2000–2012 and detailed soil and land use maps were used as input data.