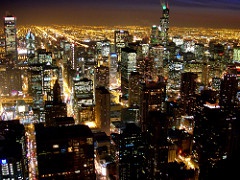 What measures may be effective in reducing the urban heat island effect and cool down cities during heat waves? A comparison of recent insights from scientific studies on often-advocated measures such as green roofs, planting more trees, and increasing the albedo of roofs and pavements, showed that green roofs (such as a mat of sedum) on cooling the city might not be that effective.

Observations of green roofs in Chicago, for instance, did not alter temperatures in the surrounding areas significantly. A modeling study simulating 25% of the roof area along a street in the centre of Arnhem in the Netherlands as green roofs had no effect on street-level temperatures for conditions such as the 2003 European heat wave: the wind blew away the cooler air before it could reach the ground.

Instead, whitening roads and roofs (cool roofs), and thus increasing the city’s reflectivity or albedo, planting trees and converting paved areas to grass seem to be more effective.