Adaptation potential of European agriculture in response to climate change 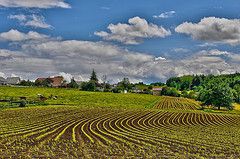 Under climate change, average farm profits across Europe would increase modestly (1.5%) with adaptation but could decline by 2.3% without adaptation. However, warmer regions in southern France, Spain, Italy, Greece and Portugal already beyond the temperature optimum of 16°C could see substantial residual damages from climate change of over 10% even after adaptation. Without adaptation even cooler regions in central France and Germany could see declines in profitability due to warming by 2040. In agreement with several previous studies, the authors found that projected temperature changes are more important than precipitation changes in determining the impacts of climate change over the next few decades. They found that the impact of mean temperature change on yield is around 5-10 times larger than the impact of precipitation by 2040; projected precipitation changes tend to be small compared with projected temperature changes. It should be noted, however, that these estimates do not include a number of moderating influences that may limit climate change impacts such as potential yield gains in southern Scandinavia or the CO2 fertilization effect.