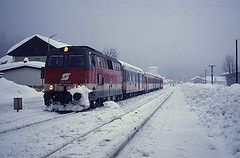 In the past decade, winter consequences and flood events accounted for 96% of the total rail and road networks costs in the Alps, 92% in mid-Europe and 91% across EUR29 (EU plus Switzerland and Norway). While the road sector in mid-Europe is dominated by winter-related costs, European roads in general are slightly more affected by the consequences of floods. In rail transport, in contrast, we see a very clear dominance of floods and their consequences, including landslides, mudflows and avalanches. Floods and mass movements have a high potential for damaging infrastructures with several months of entailed repair and detouring traffic, which is more relevant in rail than in road networks as these are less dense and much more complex to operate.

The forecasts indicate that expected milder winters in Europe lower the expected total costs for road transport by 50%, and increase the rail-related damage costs by 80%. The latter is partly due to the high sensitivity of rail to flood and mass movement consequences and partly due to the strong increase in rail demand. Adaptation of rail networks to an increasing number of hydrological events is needed, particularly in the Alpine area.

There seems to be a larger adaptation potential in road transport than in rail: technology can improve the coordination of institutions and provide users with the relevant information in real time, and car-to-car and car-to-infrastructure communication technologies are expected to enter the market in the coming decades and will be connected to weather information systems.

In the rail sector, the ‘‘low-hanging fruits’’, namely information and communication systems, seem to have already been harvested, and investments in advanced protection systems, e.g., tunnels, protection walls and enlarged drainage, need to be considered to support proactive maintenance strategies. The currently completed, ongoing and planned rail base tunnels Simplon/Lötschberg, Gotthard and Brenner help to make the infrastructure less vulnerable to natural hazards. According to rail infrastructure experts, the most promising measures for the Alpine region are switch protection, increased (preventive) maintenance activities (infrastructure and existing protection systems), vegetation management along rail tracks and installation of (automatic) monitoring systems.