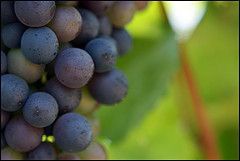 Greece is one of the oldest wine-producing regions in the world. Today, the area cultivated with winegrapes covers approximately 67,000 ha (of which about 29,000 ha are under protected geographical indication) where about 200 indigenous varieties are cultivated. Island areas represent 26% of the total area under winegrapes in Greece (about 17,500 ha).

Viticulture is affected by climate change, mainly by a shift in the four basic grapevine developmental stages budbreak, flowering, véraison (beginning of maturation) and full ripeness (harvest). These main events have shown a 5–10 d response per 1°C of warming over the last 30–50 years averaged over many wine regions and varieties. Warmer conditions due to climate change are generally associated with shorter intervals between phenological events and to earlier harvest dates.

Harvest and climate data from eight wine production regions in Greece, each representing a different winegrape variety (both white and red varieties), covering a period of approximately 20 years or more, were analysed. The harvest date series come from four mainland regions and four islands.

The results show a statistically significant earlier occurrence of harvest in five out of eight locations: an advance by 0.31 to 0.55 days per year for three island locations, and an advance by 0.35 to 0.77 days per year for two mainland locations. The two other mainland locations showed non-significant trends over time, while the other island location showed significantly delayed grape harvest dates. The latter delay may be due to non-climate factors; grape growers may adapt viticultural practices to delay grape ripeness and thus mask the effect of climate change on grape ripening and minimize harvest anomalies. A relationship between climate change and grape harvest date may be obscured by a number of reasons. For instance, in areas where late ripening varieties are grown, and the maturation period does not allow sugars to accumulate to favourable levels, warming would improve sugar content at harvest but without necessarily a shift in the harvest time; in two mainland locations with non-significant trends over time grown varieties are late ripening varieties.