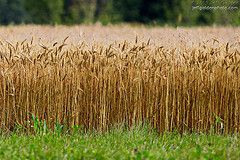 Global yield impacts of climate change and adaptation have been evaluated by analysing a data set of more than 1,700 published simulations for three crops: wheat, rice and maize. This is the largest pool of data from diverse modelling studies ever used for a global synthesis of this kind; the results have contributed to the food security and food production systems chapter of the Fifth Assessment Report (AR5) of the IPCC.

The results show that without adaptation, losses in aggregate production are expected for wheat, rice and maize in both temperate and tropical regions by 2 °C of local warming. The results also show that crop-level adaptations increase simulated yields by an average of 7–15%, with adaptations being more effective for wheat and rice than maize. Yield losses are greater in magnitude for the second half of the century than for the first. Even moderate warming may reduce temperate crop yields in many locations.

For around 1-3 °C warming, the data show both positive and negative yield responses, whereas the previous Fourth Assessment Report (AR4) had primarily positive responses at these temperature changes. For all three temperate crops the new data set shows a greater risk of yield reductions at moderate warming than AR4. The results show that adaptation provides clear benefits for wheat and rice: the central tendencies indicate that most yield loss in wheat may be avoided, or even reversed, in tropical regions up to 2-3 °C of local warming and in temperate regions across a broad range of warming.

In the more than 1,700 published simulations there is a majority consensus that yield changes will be negative from the 2030s onwards. More than 70% of projections indicate yield decreases for the 2040s and 2050s, and more than 45% of all projections for the second half of the century indicate yield decreases greater than 10%. The magnitude of the yield impact generally increases with time. These projections include simulations with adaptation, suggesting that farmer adaptation earlier in the twenty-first century can ameliorate some, but not all, risk of yield reductions. It looks like increases in yield variability become increasingly likely as the century progresses.

There are a number of limitations with respect to this meta-analysis, however, such as:  the lack of simulation of pests, weeds and diseases, the frequent assumption of water availability into the future despite ongoing changes in many regions, inaccuracies in representing adaptations, and structural, parameter and bias correction uncertainty in both crop and climate models.