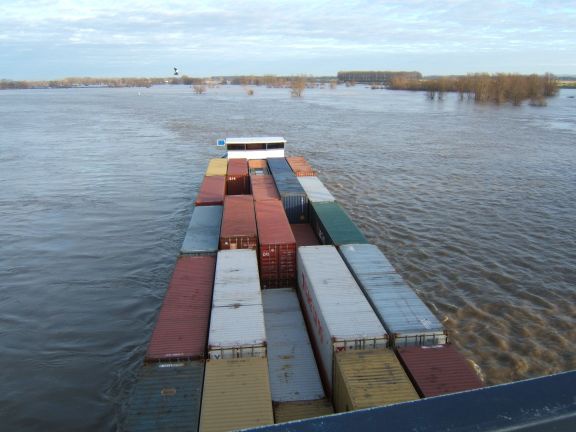 In Europe, the highest amount of cargo by means of inland waterways is transported in the Rhine–Main–Danube corridor. In this corridor, no decrease in the performance of inland waterway transport due to extreme weather events is expected till 2050. Extreme weather events relevant to inland waterway transport are low-water events (drought), high-water events (floods) and ice occurrence. Of less importance are wind gusts and reduced visibility. There is no convincing evidence that low-water events will become significantly severer on the Rhine as well as the Upper Danube in the near future. However, on the Lower Danube, some impact of drought in association with increased summer heat might appear. Severe low-water situations seem to become more important in the period 2071–2100. A quantitative conclusion on the future effects of high water on inland waterways cannot be drawn at this stage.

Ice occurrence is decreasing, due to global warming, as well as human impacts leading to shorter periods of suspension of navigation in regions where navigation may be prevented by ice. In fact, the Upper and Middle Rhine navigation has not been suspended due to ice since at least the 1970s. For the near future (until 2050), wind gusts are expected to remain on the same level as today, thereby not decreasing the safety of inland waterway transport. Visibility seems to improve, if the results for European airports are considered, thereby improving the safety of inland waterway transport as well as operation of inland waterway vessels.