Trends in fish species along the Portuguese coast 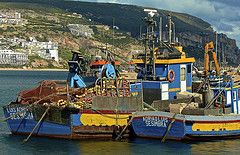 For the fishing industry the greatest challenges are overfishing and climate change. The species richness of the Portuguese coast is generally higher than that found in northern Europe and similar to that of the Mediterranean, since many species have their southern or northern distribution limits along the Portuguese coast.

For the period 1927–2011, Portuguese data on landings of species with affinity for temperate waters generally presented a decreasing trend, whereas species with affinity for subtropical/tropical waters showed an increasing trend. This variation was associated with variation in temperature, as warm years had lower landings of temperate species and higher landings of subtropical/tropical species. Sea surface temperature along the Portuguese coast has increased between 1927 and 2011.

Landings from commercial fishery can provide indications of changes in population composition and abundance, and of the impact of climate change. These data, however, are also influenced by environmental factors, fishing techniques, fishing equipment, fishermen behaviour, changing markets, discarding, management and economic factors. Also, data on landings may differ from actual catches because fish with a high commercial value may be sold directly on the market and not be present in landings data, and low-value species may be discarded.

In the future, it is expected that the impact of climate change will promote, in general an increase in species richness along the Portuguese coast.

Climate change may greatly affect small-scale fisheries, as their limited mobility makes the task of following target species almost impossible. On the other hand, as they use a large diversity of fishing gears and fishing techniques, multi-gear fisheries could more easily adapt to the effects of climate change.