Agricultural land use suitability in Hungary 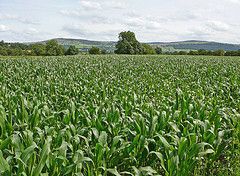 In 2010, Hungary became one of the top 5 exporters of maize in the world. Under current conditions, crop systems are mainly rain fed, and water licences are massively underexploited. Around 98 % of the agricultural land is not irrigated, mainly due to the large number of small farms, and the lack of integrated water management system and of strong state involvement.

It is projected (for the IPCC A1B emissions scenario) that in the second half of the century, maize production is only going to be possible with irrigation. Irrigation will also become important for other crops such as green peas and potatoes.  The adequate use of the surface water resources could make Hungarian agriculture more stable and intensive and could help to avoid the negative effects of the decreasing precipitation projected by the climate scenarios.