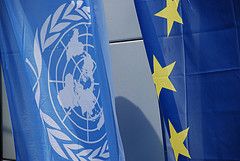 Future security risks have been related to climate change by several countries and international organizations. Among scientists the link between climate change and conflict and national security is still a controversial topic, however. On the other hand, disaster and conflict often go hand in hand; in 60 years of peacebuilding operations in 49 countries, in only one case (Kosovo) were there no natural disasters.

In 2009, the United Nations Secretary-General (UNSG) identified five ways in which climate change may be linked to international security:

Opportunities for integrating climate change into peacebuilding have been investigated. The opportunities refer to socio-economic recovery, politics and governance, security and rule of law, and human rights. More attention needs to be given to these opportunities in order to build resilience and reduce the likelihood of more daunting and costly challenges in the future. To make this work, three obstacles have to be overcome: