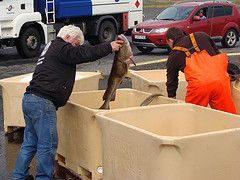 Climate change yield impacts were projected for countries with different dependencies on marine fisheries, based on linked models of physical, biological and human responses to climate change (and the A1B SRES emissions scenario). The analyses were carried out for a large number of countries that in total yield approximately 60% of global fish catches. Projected impacts indicate increased fish productivity at high latitudes and decreased productivity at low/mid latitudes, with considerable regional variations. Increases and decreases in fish production potential by 2050 are estimated to be <10% from present yields.

The results are consistent with previous studies that predicted a 30-70% increase in fish catch potential in high latitudes and a 40% drop in the tropics, with a global 1% overall increase by 2050. For Europe, there will be an increase in Iceland and Norway. Climate change and exploitation impacts are likely to be of greatest concern in the maritime countries of South and Southeast Asia, where fishing pressure is already very high and poorly regulated.

Despite projected human population increases and assuming that per capita fish consumption rates will be maintained, ongoing technological development in the aquaculture industry suggests that projected global fish demands in 2050 could be met. This conclusion, however, is contingent on successful implementation of strategies for sustainable harvesting and effective distribution of wild fish products from nations and regions with a surplus to those with a deficit.