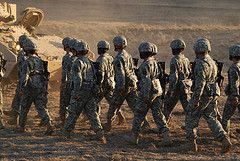 Concerns about the implications of climate change for security through its impact on hydrological resources have been expressed at the highest political level, but research has still not established a causal link between hydro-climatic variability (or water scarcity) and international or civil violence. Although under certain social conditions they might aggravate the risk of conflict, water scarcity and climate change are overall not found to have an important association with armed conflict, especially if compared to poverty and dysfunctional institutions.

Things may change in the future, though. Water may become a cause of war in the future due to climate change and wars may not be fought over water, but caused by consequences of its scarcity, e.g. rising food prices or scarce arable land.

The link between climate change and security threat is not as simple as often presented in the media:

To reduce vulnerability, pertinent democratic and social/civil security institutions should be strengthened where they exist, and promoted where they are still absent.