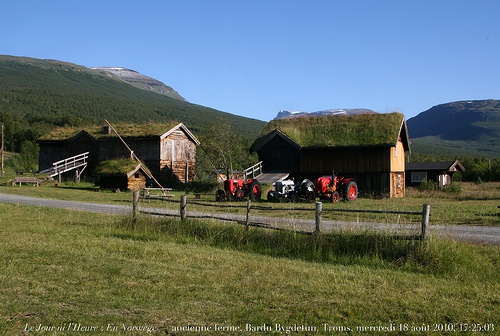 A longer growing season with higher mean temperatures will enable farmers to increase the number of harvests and, due to the higher growth potential at higher temperature, the total yield per area. It may also enable growing more heat demanding species and varieties of crops. This could increase use of legumes and more productive perennial forage grasses and potentially increase the production of vegetables and grains.

The correlation between a longer growing season and opportunities for agriculture is not straightforward, however. In Northern Norway, an autumnal extension of the growing season is limited by the reduced photoperiod which will terminate growth even if the temperature is sufficiently high. Further potential gain of an increased growing season thus requires an earlier onset of spring. Utilizing earlier spring conditions depends on several factors, however, including the risk for frost in this period. Frequent “frost on snow-free soil” leads to thick layers of frozen soil, which will keep soil temperatures low throughout spring even if other conditions would favour an early start of the season. For Northern Norway a reduction in snow amount and length of the snow cover season (by 1–3 months) is projected. Besides, increased temperature during autumn can shorten the hardening period, resulting in less hardened plants which affects the ability of plants to survive winter. Precipitation is projected to increase especially in autumn when precipitation is already quite high. This is at present complicating harvesting and other farm operations and these problems are expected to increase in the future. Negative effects are “drowning” of crops and soil damage from using heavy machinery. Increased temperatures may increase damage by weeds, pests and diseases.

Snow and precipitation are perhaps the most important climatic factors acting directly on livestock and indirectly primarily via changes in vegetation. The need for winter housing of livestock and feed concentrates may reduce. Introducing new species, like perennial ryegrass, may increase fodder quality, while animals simultaneously might enjoy prolonged grazing periods on fresh grassland. Increased precipitation may, however, negatively affect fitness of animals. While heat stress is not expected to be a big issue in Northern Norway, warmer conditions will support the dispersal of disease-bearing insects or other host animals (including new vectors currently limited by colder temperatures) and enhance the survival of viruses, thus increasing risk of infections to livestock.

To take advantage of the extended growing season and higher growth potential, adaptive strategies include careful selection of crop species and cultivars, selection of sowing time and fertilization time and level, and crop rotation (to maintain good soil properties).

Increased productivity due to higher temperatures will most likely be accompanied by an increased need for fertilizers and pesticides with potentially negative environmental effects. Instead, increasing biodiversity is a good alternative to yield benefits, weed suppression and persistency. Introducing legumes into grassland swards will also reduce fertilizer requirements and improve N-use efficiency.