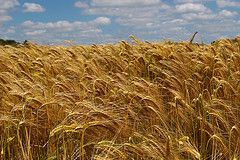 With 25% of the global wheat area and 29% of global wheat production, Europe is the largest producer of wheat. The increased occurrence and magnitude of adverse and extreme agroclimatic events are considered a major threat for wheat production. A recent study showed that, by 2030, we should expect a twofold increase in the global wheat-growing area threatened by extremely high temperatures during critical developmental stages in a typical year, and a more than threefold increase of the area at risk by 2050.

From climate change projections it was shown that the occurrence of adverse conditions for the main European wheat-growing areas might substantially increase by 2060 compared to the present (1981–2010), which is likely to result in more frequent crop failure across Europe. This would have profound repercussions given the importance of European wheat production in the global food trade. The climate projections indicate that sowing dates will move forward on average by 15 +/- 7 days in 2060 compared to the present, whereas anthesis and maturity dates will be two weeks earlier.

According to the authors of this study, these findings highlight that the adaptation strategies must be a compromise between using early-ripening cultivars to avoid stress as much as possible and maintaining a growing season length with the highest possible effective global radiation to sustain current yields or minimize yield decrease. With early-ripening cultivars adverse condition risk can be reduced; shortening the growing season, however, reduces the effective global radiation and therefore yield potential.

They stress the importance of regionalization of adaptation strategies: in Northern Europe, by using late-ripening cultivars the growing season is longer without the penalty of increased exposure to adverse agroclimatic conditions; in central Europe, by switching to late-maturing cultivars the risk of adverse event frequency significantly increases. They state that diversity of wheat varieties for different regions and season-specific threats should be promoted to enhance climate resilience.