Costs and benefits of adaptation to river flood risk 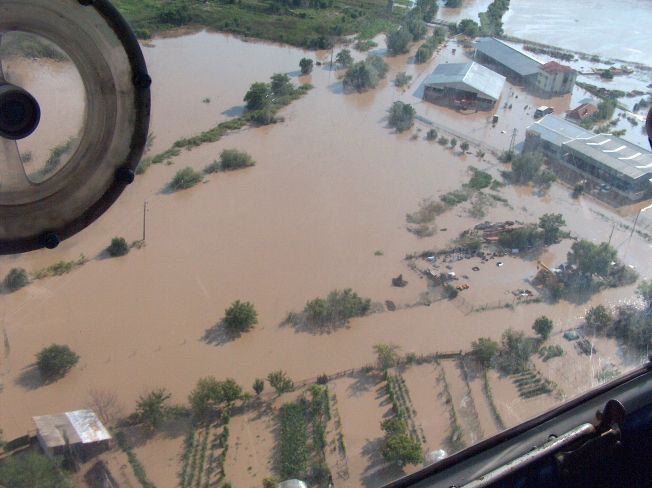 The impact of climate change and socio-economic development in the European Union has been assessed under the assumption of uniform flood protection levels up to the 50-, 100- and 250-year flood event. This was done for 12 climate experiments derived from a combination of 4 GCMs and 7 RCMs, covering the period 1961–2100, under a medium–high emission scenario (A1B).

Assuming protection against a 100-year flood event, the estimated EU expected annual damage for the period 1961–1990 is €5.5 billion. In the absence of measures to keep flood protection at the 100-year flood level (no adaptation), annual damages are projected to reach €98 billion/year (constant 2006 prices, undiscounted) by the 2080s due to the combined effects of socio-economic and climate change. The largest share of these damages arises from socio-economic development. With adaptation, keeping flood protection at the 100-year protection level, the avoided damages (benefits) would amount to €53 billion/year by the 2080s.

For most countries present damages under a 100-year flood protection level are well below 0.5% of the national GDP. In general, higher relative impacts are observed in Eastern European countries, especially in Hungary and Slovakia (0.8% and 0.6%, respectively). By the end of this century, relative economic impacts are projected to increase for all EU countries except Poland and the Baltic States. In relative terms, Eastern European countries will still be most severely affected by flooding, especially Hungary (1.36%), but also Slovakia (0.87%), the Czech Republic (0.81%), and Romania (0.79%).

At the country level significant benefits were identified for the United Kingdom, France, Italy and Hungary from upgrading protection levels to the future 100- year flood event. However, also Romania, the Czech Republic, Slovakia, Slovenia and Bulgaria would see large benefits relative to their GDP. Some countries in Eastern Europe would potentially have to spend a significant share of their current GDP to abate the future impacts from flooding in view of socio-economic and climate changes – notably Slovenia (0.7%), Bulgaria (0.6%), Romania and Hungary (both close to 0.45% of current GDP).