Debris-flow activity in the Swiss Alps under climatic change 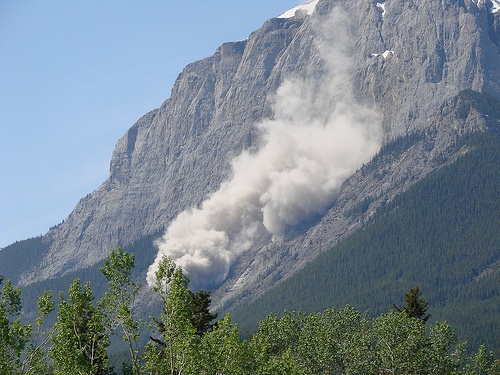 Possible impacts of climate change on debris-flow activity in the Swiss Alps have been assessed by analyzing debris flow events in the past 150 years and using this information for future projections on climate change.

The dataset of past debris flows has been obtained from eight high-elevation catchments in the Swiss Alps for which hydroclimatic conditions leading to the release of events were reconstructed for the period 1864–2010. Future projections of climate change are based on a number of regional climate model runs (downscaling eight different global circulation models) driven by the A1B emission scenario.

The predicted warming of mean and extreme air temperatures will very likely lead to a prolongation of the debris-flow season, in line with what has been observed as a result of climate warming since 1864. Events might become possible in March, especially in the late 21st century. Such early-season debris flows would remain rather small under current climatic and sediment conditions, but could become larger in the future. They should be seen as critical, even more if rain should fall on previously wetted snow.

A comparable increase can also be expected for events in November and December. No debris flows have been recorded at this time of the year in the observational records, but events must be expected in a warmer climate, even more so towards the end of the 21st century. In terms of debris-flow volumes, late-season events are likely to become more critical as larger volumes of ice-free sediment might be available in the source areas of debris flows due to progressive active layer thickening in alpine permafrost regions. The largest events in the observational records have been registered during late-season events under past climatic conditions (Stoffel et al. 2008), and this trend is likely to continue in a future climate, but at later periods of the year, as rainfalls seem to decline in future summers.