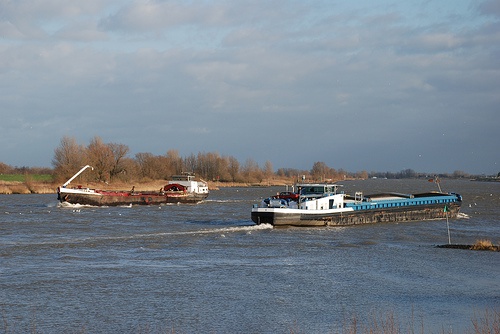 In countries like the Netherlands, Belgium and Germany, inland waterway transport has a substantial share in freight transport (measured in ton-kilometers or ton-miles) with 33, 18 and 13 % in 2010, respectively. Both in the dry cargo Rhine fleet and in the tanker Rhine fleet, the Dutch fleet forms about 50 % of total capacity.

The Rhine corridor is by far the most important inland waterway in Europe in terms of volume transported (63 % of total volume in Europe in 2006). This is mainly because the Rhine connects the seaports of Rotterdam, Amsterdam and Antwerp with large industrial areas in Germany. The cargo types most transported are metal ores, coke and petroleum products, followed by coal.

At extremely low water levels, the price per tonne for inland waterway transport in the river Rhine area will almost double. These increased transport prices result in welfare losses. For the dry summer of 2003, the losses for North West Europe have been estimated to sum up to around €480 million.

Shipping may benefit from the low water periods because the temporary reduction in capacity may have a further upward pressure on prices. The clients of the inland waterway transport sector will in the end shift the burden to the final consumers. This means that the economic effects of low water levels are diffused thinly across large groups of consumers in many countries the estimated interval for

In the short run, adaptation to low water periods can take place via modal shift to road and rail transport to avoid the high prices in water transport. Studies indicate that this shift will be modest (5–8 %) because even with low water, barges remain cheaper than their competitors on most of the relevant markets. Other options to adapt to low water periods on the short-term are to move barges from submarkets not affected by low water to markets that are affected and to make old barges that were withdrawn from the fleet operational again.

On the long-term intensified water management (e.g., dredging) is most probably the more promising way to adapt to climate change. Adjustment to smaller ship size is unlikely; the advantages of large ships are so large that the current trend of increasing ship sizes may be expected to continue even when low water intervals become more frequent.