Navigation conditions on the Rhine-Main-Danube corridor under climate change 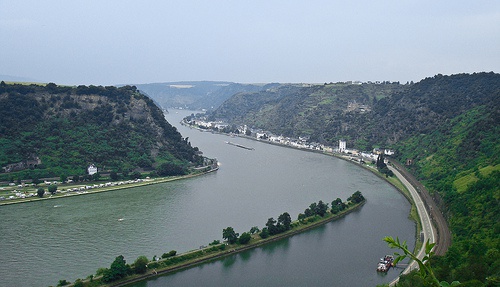 The impact of hydrological changes on navigation conditions has been studied for the Rhine-Main-Danube corridor, one of the most important waterways in Europe, for a number of climate change projections. Four impacts were studied: low flow, floods, ice and visibility (fog). The results are summarized in the table below.

Table: Summary of (projected) effects of climate and hydrological change on navigation on the Rhine-Main-Danube corridor. The findings marked by * were not directly observed or modelled but concluded from other findings (e.g. approximate indicators, neighbouring regions or from literature).

In this study, the low water threshold for navigation has been defined as the 95th percentile of the flow-duration curve for the period 1961-1990. For the River Rhine this threshold is currently (1961-1990) undershot on about 18 days per year. For the River Danube, where only monthly discharge data are available, this threshold is interpreted as the number of months the monthly 95th percentile is undershot in a 30-year period (at the gauge Vienna).

At high water levels, navigation may be restricted in terms of speed limits, the concentration of traffic in the centre of the fairway (to reduce wave stress on the lateral infrastructure) and (at the highest threshold) a general stoppage of navigation. In this study the flood threshold for the River Rhine was defined as a discharge that is exceeded on 3% of the days per year in the mean of the period 1961-1990. For the River Danube this definition could not be applied because only monthly discharge data were available.

With respect to the Rhine-Main-Danube corridor, ice is mainly an issue for the River Main, the RMD canal and the River Danube.

Meteorological phenomena can reduce visibility and thus can harm vessels that navigate on sight. Vessels without radar systems can be stopped according to official regulations. But also vehicles with radar have to operate with care, which often means loss of time due to speed limits and slower manoeuvring.