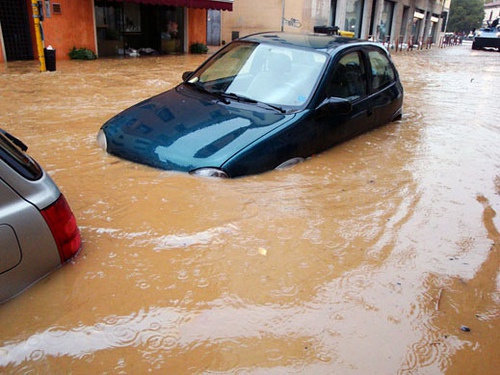 From an assessment of the implications of climate change for future flood damage and people exposed by floods in Europe it was concluded that the expected annual damages (EAD) and expected annual population exposed (EAP) will see an increase in several countries in Europe in the coming century. Most notable increases in flood losses across the different climate futures are projected for countries in Western Europe (Belgium, Denmark, France, Germany, Ireland, Luxembourg, the Netherlands and the United Kingdom), as well as for Hungary and Slovakia. A consistent decrease across the scenarios is projected for northern countries (Estonia, Finland, Latvia, Lithuania and Sweden). For EU27 as a whole, current EAD of approximately €6.4 billion is projected to at least double or triple by the end of this century (in today’s prices), depending on the scenario. Changes in EAP reflect well the changes in EAD, and for EU27 an additional 250,000 to nearly 400,000 people are expected to be affected by flooding yearly, depending on the scenario.

The authors stress that the monetary estimates of flood damage are uncertain because of several assumptions underlying the calculations (only two emission scenarios, only two regional climate models driven by two general circulation models, no discounting of inflation to future damages, no growth in exposed values and population or adjustments, estimates of flood protection standards); the results are indicative of changes in flood damage due to climate change, however, rather than estimates of absolute values of flood damage.