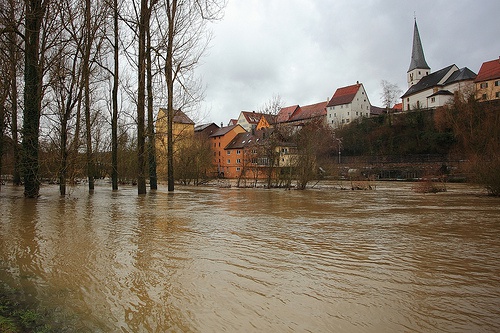 Global river flood risk for the end of this century has been projected based on the outputs of 11 global climate models and a number of scenarios of changes in the concentration of greenhouse gasses. Flood risk change was expressed in the change of the return period from 1971-2000 (current situation) to 2071-2100 (future projection) of a river discharge having a 100-year return period in 1971-2000. This projection provides the potential risk of flooding, irrespective of non-climatic factors such as land-use changes, river improvements or flood mitigation efforts such as the construction of dams.

According to these results, the frequency of occurrence increases (the return period decreases) across large areas of South Asia, Southeast Asia, Northeast Eurasia, eastern and low-latitude Africa, and South America. For Europe, according to these results, flood frequency increases in West and Northwest Europe, including the UK, Ireland, the Low Countries and most of France. In contrast, flood frequency decreases in many regions of northern and eastern Europe, Anatolia, Central Asia, central North America and southern South America. Globally, flood frequency increases in 42% and decreases in 18% of the land grid cells. The spread in the results of the return periods for different models is large, however, and generally stretches out from an increase to a decrease of flood frequency. Remarkably, all projections for the Rhine River indicate an increase of the frequency of the discharge that has a 100-year return period in 1971-2000.