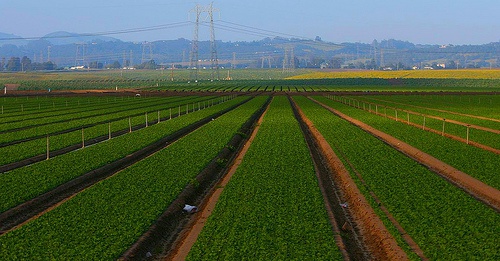 Between 10 and 16% of global crop production is lost to pests, with similar losses postharvest. From an analysis of published observations of 612 crop pests and pathogens it was concluded that the average poleward shift in recorded incidences of these pests and pathogens since 1960 is 2.2 ± 0.8 km/year for the Northern Hemisphere and 1.7 ± 1.7 km/year for the Southern Hemisphere.

The results indicate significant positive latitudinal shifts for many important groups of crop pests and pathogens. Overall, there has been a significant trend of increasing numbers of pest and pathogen observations at higher latitudes, globally and in both the Northern and Southern hemispheres. For all pests combined, the mean latitudinal shifts were not significant, however, but this seemed to be due to large variability among pest groups.

Although recent climate change is implicated as an important driver of these observations, other factors could bias the results. For instance, new crop varieties and agricultural technologies have extended the agricultural margin northward in the USA, and deforestation has increased production in the tropics, thus providing new opportunities for pest invasions at high and low latitudes.