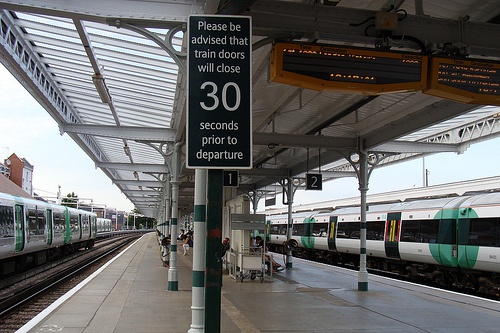 Possible temperature-related climate change impacts on the main line railway network of Great Britain have been assessed. Regional climate model projections for the future period 2030–2059 under the A1B emissions scenario have been used and compared with the baseline period 1971–2000.

The results include projected decreases in the wintertime (November–March) occurrence of temperatures conditions associated with freight train failure owing to brake problems. The change is statistically significant at the 5% level across Great Britain, and its magnitude is between −70 and −20 %.

Solutions to compensate for the projected impact of climate change on the main line railway network of Great Britain would require significant investment. An example of a possible infrastructural change is changing the structural form of the track—e.g. replacing the traditional ballasted track with sleepers with continuous concrete slab track, as used on high-speed lines in (for example) Germany. Although this track generates more noise, it requires less maintenance than ballasted forms as the maintenance issues associated with ballast are removed.