If the intensity and frequency of events with extreme wind pressures would change, this would mean increasing loads on the buildings, affecting their stability and also the way of fixing of the external lining materials and the complete reconsideration of their structure might be needed (1).

Extreme weather conditions result in short-time rainfalls of high intensity and they have an impact on the buildings. Consequently the applicability of various watertight insulating facilities should be reviewed in conjunction with the sinks, drains and water conveying facilities. Rainfalls of high intensity have their impact also on the paved spaces around the buildings and will considerably affect the design of rainwater drainage and sewer systems including the shafts of the sinks (1).

The design of foundation and other underground structures of buildings are also affected by high intensity rainfall. Namely, the periodically occurring soaking-drying process causes (especially in clay soil) the “lifting of buildings” (e.g. rising and sinking of buildings). The hydraulic pressure of groundwater levels means an extra load on subsurface structures (cellar, basement), which also need altered design requirements (1).

The forecasted average temperature rise in the summer months will cause a signifi cant warming of the inner and external parts of the buildings. Natural green areas are replaced by the masses of buildings, the cleaning and cooling effect of wind is attenuated by the blocks of the buildings. This harmfully affects the health and comfort feeling of the citizens (1).

In Europe, the highest amount of cargo by means of inland waterways is transported in the Rhine–Main–Danube corridor. In this corridor, no decrease in the performance of inland waterway transport due to extreme weather events is expected till 2050 (11). Extreme weather events relevant to inland waterway transport are low-water events (drought), high-water events (floods) and ice occurrence. Of less importance are wind gusts and reduced visibility. There is no convincing evidence that low-water events will become significantly severer on the Rhine as well as the Upper Danube in the near future. However, on the Lower Danube, some impact of drought in association with increased summer heat might appear. Severe low-water situations seem to become more important in the period 2071–2100. A quantitative conclusion on the future effects of high water on inland waterways cannot be drawn at this stage (11).

Ice occurrence is decreasing, due to global warming, as well as human impacts leading to shorter periods of suspension of navigation in regions where navigation may be prevented by ice. In fact, the Upper and Middle Rhine navigation has not been suspended due to ice since at least the 1970s (12). For the near future (until 2050), wind gusts are expected to remain on the same level as today (13), thereby not decreasing the safety of inland waterway transport. Visibility seems to improve, if the results for European airports are considered (13), thereby improving the safety of inland waterway transport as well as operation of inland waterway vessels.

The impact of hydrological changes on navigation conditions for the Rhine-Main-Danube corridor has been studied for a number of climate change projections (for the River Rhine: 27 projections including different emission scenarios; for the Upper River Danube: 20 projections including emission scenario A1B only). Estimated changes are generally given for the period 1950 to 2050, sometimes also for the period 1850 to 2100. Four impacts were studied: low flow, floods, ice and visibility (fog) (9). The results are summarized in the table below. 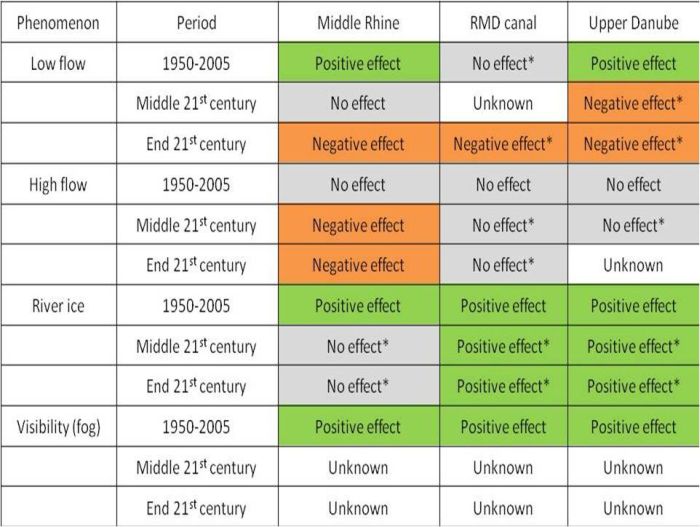 Besides it is also important to (1):

Soviet-era panel-style buildings are an important consideration when planning for climate change in the region. Most block flats, which were designed to have a lifespan of about thirty years, already were in disrepair at the time the regimes fell (2). Bulgaria, for instance, recently indicated that 10% of its panel dwellings were in need of urgent repairs (2) while the Slovak Ministry of Construction estimated that it would cost over 10.3 billion Euros and take more than thirty years to complete the structural repairs necessary to ensure the safety of these buildings (3).

Although they are in need of basic renovation, there is growing evidence that panel buildings, both block flats used for housing and public buildings of similar construction, have the potential to be efficiently renovated and to incorporate energy-saving retrofits. The major aspects of retrofitting focus on energy-saving measures. These include thermal insulation, replacement windows, and modernization of central heating systems. In addition to these measures, green roofing is being tested as a further means for improving the quality of living spaces as well as a way to manage fluctuations in precipitation. Studies suggest that rooftop gardens:

In making long-term programmes, plans, concepts and development plans for infrastructures (such as building power stations, or investments in traffi c-and-transportation) the preparation of climate-impact studies, as parts of the strategic environmental impact assessment, should be carried out (1).

The references below are cited in full in a separate map 'References'. Please click here if you are looking for the full references for Hungary.

Read about transport, infrastructure and building in other countries: