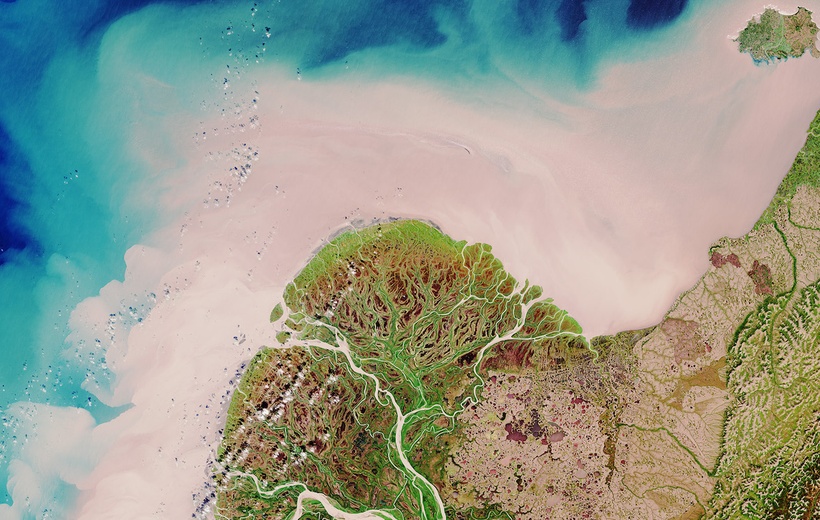 More than 300 million people live in river deltas, globally. The future of our deltas depends on the future of our rivers. With sea level rise and delta subsidence, river sediment fluxes are crucial for the resilience of the deltas.

These results were derived from an analysis of satellite data for 414 rivers worldwide covering the time span from 1984 to 2020. The results have been evaluated against 130,000 field measurements.

For 53% of the rivers in this study, the trends of decreasing or increasing sediment flux in the period from 1984 to 2020 were significant: 36% and 17% of all rivers showed significant decreasing and increasing trends, respectively.

The trends for rivers in the Northern Hemisphere reflect widespread dam building in the 20th and 21st centuries (see for instance https://youtu.be/c6A7IupZ5KA). In the Southern Hemisphere, far less dams have been built so far, and the effects of intensive land-use change, increasing erosion, dominate human impacts on the rivers, causing rapidly increasing sediment fluxes.

The analysis of satellite data starts in 1984, but sediment fluxes have already been decreasing in many large rivers because of dams since the mid-20th century. These dams have been built not only for electricity production but also for flood control, irrigation purposes, or water storage. The decrease in fluvial sediment fluxes varies globally. Some rivers have been modified by dams more strongly than others. For the Mekong River, for instance, only 4% of the total sediment load is expected to reach the river delta, the rest being trapped by dams.

58% of the rivers in this study have one or more major dams. In 78% of those rivers sediment flux has decreased after building the dams. In most of these rivers, the main impact was caused by dams that have been built more than half a century ago. These dams were already trapping substantial amounts of sediment when additional dams were built after 1984. In the words of the authors: ‘With sediment retention already so high before the period of satellite observation, potential sediment flux reductions in the satellite period were comparatively limited’.

On the global scale, the impact of dams dominates over the impacts of land-use change; according to this study, the overall effect of human impacts on global suspended sediment transport from rivers to the oceans is a reduction by 49% on average.

A shift to South America

Before global dam building, the contribution of South American rivers to the total global sediment fluxes into the oceans was about 20%. Now, this contribution has increased to 52%. The dominant role of Asian rivers to ocean sediment input has been overtaken by the rivers of South America. But for how long? Many dams will be built in the rivers of the Southern Hemisphere as well. More than 300 large dams are planned for the Amazon River, for instance. This river exports two-thirds of the sediment from South America and more sediment than any other global river. No doubt, these planned dams will trap a large part of the river’s sediment flux, with adverse consequence for river morphology, estuary biodiversity, and nutrients flow to coastal waters.

The future of our deltas

Deltas not only face sea level rise but also the consequences of subsidence due to groundwater and fossil fuel abstraction. As a result, in many densely populated deltas, sea level rise with respect to the level of the delta is much larger than just absolute sea level rise itself. In a natural state, sediment fluxes from the river would settle in the river’s delta and counteract the consequences of relative sea level rise. More than ever, the river sediments are needed to protect the delta and the people living in it. But this protection has already gone in many deltas in the Northern Hemisphere, and those in the Southern Hemisphere are about to follow. It’s time we all realize that it’s not just climate change that’s threatening the future of our deltas. The impacts of dam building in rivers outpace the growing threats from climate change. The consequences for densely populated river deltas will be dramatic.