A flaw in classic approach to flooding: the floods of 2021 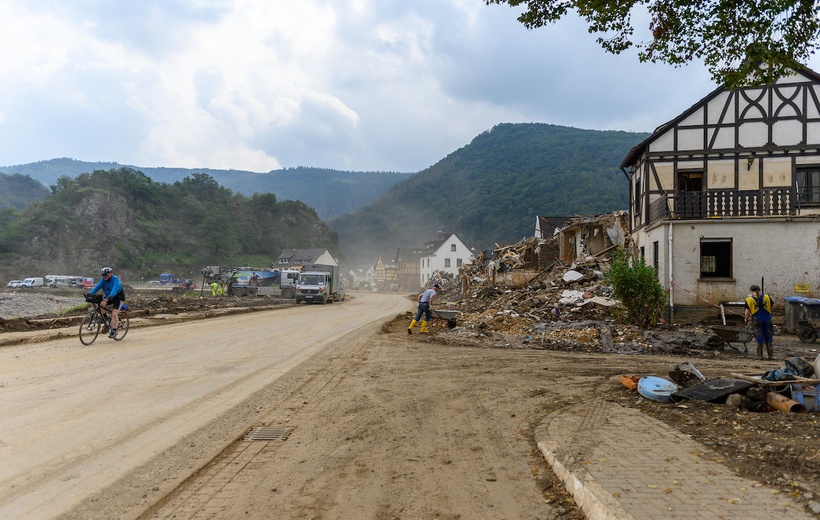 In July 2021, a cyclone travelled from the North Atlantic via France to western Germany. There, its propagation speed was slowed down by an anticyclone over eastern Europe, and the cyclone caused almost stationary precipitation over the Eifel region from 12 to 15 July. Extreme precipitation volumes fell on soils that were already mostly saturated due to previous rainfall. This caused large-scale flooding in parts of western Germany, Belgium, and the Netherlands. The flood particularly hit several river catchments of the Eifel region in western Germany and Belgium. In Germany alone the disaster led to 184 fatalities and – as of 24 November 2021 – 2 missing persons, the highest toll in Germany for the past 6 decades. The estimated damage to private households, infrastructure, forestry, agriculture, and viticulture enterprises is EUR 33 billion.

The anticipated extreme rainfall volumes had been communicated several days ahead, and the hydrological models and numerous stream gauges were in place. Yet, civilians and authorities were surprised by the extreme nature of the flood. The actual flood wave was underpredicted, and emergency activities failed to prevent a disaster.

Media and scientists oversimplified the devastating character of this flood by highlighting the extreme rainfall and rising water levels in the main valleys, experts concluded. Other aspects – in particular the displacement of large volumes of wood, sediment and debris – made this flood so devastating and difficult to predict. These aspects are linked to hillslope processes and sustained human land use. They are characteristic of the landscape and come alive during a large flood. They may be hidden during smaller events due to their high thresholds of initiation, but once they are triggered, they make a flood like the one of July 2021 such a devastating event.

The experts stress the importance of including all these factors – and thus having a landscape scale perspective – to understand these kinds of disasters and improve preparedness and anticipation to future extreme events. According to them, the flood revealed the unpreparedness of societies, policymakers, and scientists across many dimensions.

Precipitation volumes were extremely high. Sub-daily as well as daily and multi-day amounts exceeded the values corresponding to a 500-year return period determined under the assumption of stationary climate conditions.

During the flood, the water flowing down the hills concentrated in eroding gullies. These gullies formed in particular near infrastructure. This water transported a lot of sediment. In addition, there were numerous debris flows and landslides. This altered the hillslopes by erosion of soil and vegetation and severely impacted the channels that drain the valleys. They injected coarse particles and woody debris into the channels, which had a series of consequences. In many cases, the channel thalweg was displaced, or the entire trunk river was relocated within the flood plain, and in some cases the entire flow was blocked at least temporarily. In turn, this triggered large changes in the morphology of the rivers

The woody debris clogged obstacles in the main streams, mostly bridges. Upstream water levels rose, and the inundated areas grew until the obstacle was either bypassed, overtopped, or destroyed. The water that bypassed the obstacle caused erosion. The water that destroyed an obstacle travelled downstream like an outburst flood. In one of the river valleys, 62 out of 75 bridges were destroyed. According to the experts, the unprecedented economic damage was most likely caused not only by the extent of the affected area but also by the velocity of the water flow and the combined impact of water, wood, and debris on buildings and infrastructure. These emerging effects rendered the flood an extreme beyond the hydrological scope. The experts stress that none of these processes and damage mechanisms are included in common damage models.

The drainage system contributed to the fast discharge of the flood water. As a result, this increased the rapid build-up of flood waves in subsequent channels. Where debris clogged the drainage pipes, excess water was injected into the ground, contributing to erosion and mass movements on hillslopes.

A further effect that contributed to the high death toll was the general underestimation of the flood magnitude by locals. They had experienced a ‘100-year flood event’ in 2016 and were able to cope with that. The impact of the 2021 event – partly due to the debris flows and landslides – was much higher. Only a small fraction of the warned residents anticipated massive damage and life-threatening situations. In addition – in parts of the disaster area – public authorities evacuated only when the water had already flooded houses.

According to the experts, a particular phenomenon of the July 2021 flood was the widespread activity of mostly small features that ultimately added up to unexpectedly large effects in the main river valleys. It is the interaction of many seemingly unrelated effects, and not one dominating factor, that has caused the magnitude of the disaster. This leads them to conclude that all these features need to be included in predictive models and preparation strategies. The possible impacts of flows of woody debris, for instance, must be included in the design of bridges or protective dams. They conclude that “the 2021 flood clearly demonstrated a flaw in classic flood sensing approaches: collection of just a single metric, water level, by gauges at a few spots along the main stream that overall were destroyed significantly before peak discharge had arrived”. Instead, they state, models and strategies should include “outlining potentially unstable hillslopes, riverbed changes, cascading effects, and landscape connectivity effects.”