When sea level rise accelerates, so will the erosion of rock coast cliffs 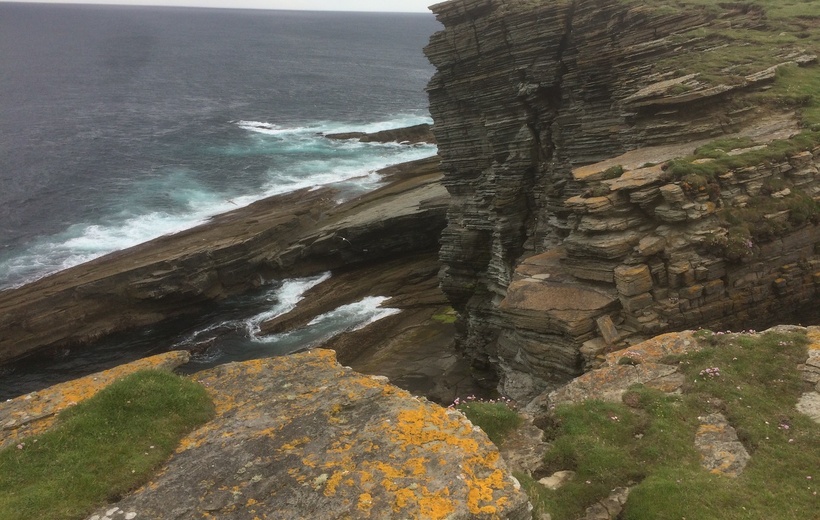 Rock coasts make up over 50% of global coastlines yet focus on future coastal erosion under sea level rise so far was mainly on soft, erodible coastlines. The presence of rock coast cliffs is a clear sign that coasts are eroding. Sea level rise will likely accelerate the erosion of rock coast cliffs because the energy of waves will reach further inshore to attack the rock cliffs. It is very complicated to project the impact of future wave energy attacks on rock coasts, however, for several reasons. One of them is the fact that rock weathering is an important component that determines the effect of wave energy on cliff retreat, and the rate at which the rock weathers varies with type and structure of the rock. Another important factor is the impact of extreme storm events, which is difficult to include in long-term projections.

The past: a key to the future

If we can quantify rock coast cliff retreat rates in the past, over a time scale of thousands of years, and determine how these rates have changed in response to changes in the rate of sea level rise since the end of the last ice age, we can use this information to make projections for the future. We are, then, using the past as a key to the future. But how do you reconstruct the retreat of coast cliffs that have disappeared? The answer is hidden in the rocks that are left behind as a rocky platform after the rock on top of them – being the rock cliffs at some time in the past – had eroded.

In this intertidal shore platform, rare nuclides formed once the rock was exposed to cosmic rays. The concentration of these nuclides in the rock is an indication of the time the rock has been exposed to the air and, thus, of the moment in the past the rock on top of them has eroded. By combining this information from rock samples across the intertidal rock platform with information on the processes of wave erosion and intertidal weathering of the rock, scientists were able to reconstruct rock coast cliff retreat rates for the past 8000 years and make projections for the future.

This long time series encompasses a time where rates of sea level rise are comparable to projected future rates of accelerated sea level rise. This time, therefore, is the key to understanding the response of current rock cliffs to future climate change. The study was carried out at two sites in the UK.

According to historical maps and recent aerial imagery, cliffs have retreated at these two sites over the past 130 years at rates of just 5.8 ± 4.0 cm/year and 5.9 ± 4.3 cm/year, respectively. The scientists conclude that the projected acceleration in the rate of sea level rise will accelerate cliff retreat. By 2100, cliff retreat rates are forecast to accelerate by at least 3–7 times present-day rates and cliff positions are likely to retreat by at least 10–14 m at the one study site, and 13–22 m at the other.

These numbers are up to an order of magnitude larger compared to long-term cliff retreat rates for the past 500 years. The scientists also conclude that these findings ‘challenge conventional coastal management policies, in which rock coasts are considered stable environments compared to sandy coastlines.’ According to them, historical rates of rock cliff erosion cannot be used for climate change risk assessments because these coastlines will no longer be as stable in the future as they were in the past.

These forecasts are consistently higher than the results of previous studies that forecast an increase in cliff retreat rates for 1 m sea level rise at 2100 between 1.2 and 2.3 times the rates of historical observations. According to the authors of the new study, this is due to simplifications in previous studies, for instance not including the impact of tidal range on wave attack on the rock cliffs. In fact, the authors consider their updated cliff retreat rate projections ‘conservative estimates’ since these estimates do not include a possible increase of storm frequency and intensity, which would ‘increase the speed of cliff retreat rates beyond their estimates in the future.’