Climate change already increases the number of rockfalls in the Alps 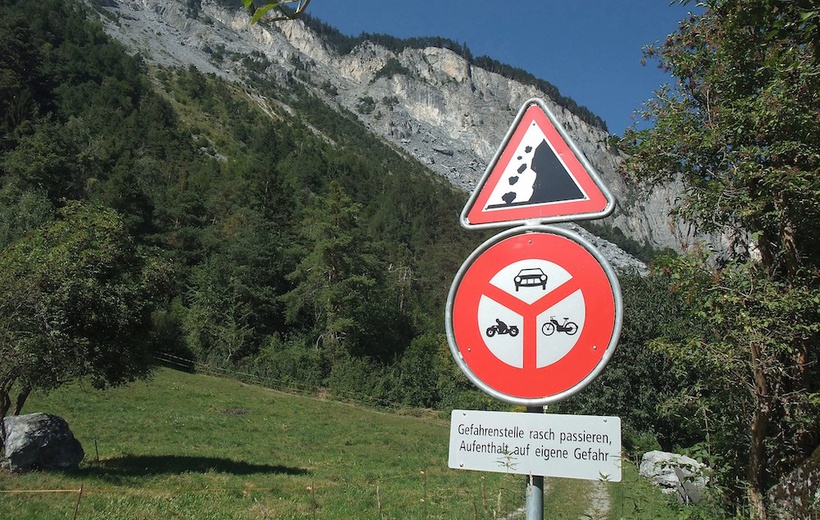 Climate change will reduce the stability of slopes in high-elevation areas in the mountains, and this will increase the risk for people visiting these areas. Temperature change and extreme rainfall events both are the main drivers of climate change impacts on slope destabilization. An impact on the occurrence of rockfall has already been ascertained. For other mass-movement phenomena, such as debris flows and complex landslides, no clear impact of climate change has been found yet.

Rockfalls and debris flows in the Italian Alps

For a catchment in the Italian Alps, changes in slope stability in time and space have been analyzed and linked to changes in climate. The research focused on small- to medium-sized rockfalls, slides, and debris flows. The initiation of these mass movements was derived from aerial photographs and orthophotos from various sources spanning from 1945 to 2019, additional field campaigns in 2019, and results from a previous study. Large mass movements were not taken into account since the response of these large-scale phenomena to changes in temperature and precipitation may take several years to decades. Small- to medium-sized events, however, may reflect a more direct reaction to environmental change and be more easily ascribed to climatic extremes.

More rockfalls and at higher elevations

More than a thousand initiation points of mass movements were detected in the period 1945-2019, the oldest mainly in the lower part of the catchment, and the more recent ones at increasingly higher elevations. The scientists concluded that small- to medium-sized rockfalls now occur up to 300 m higher in these mountains than 70 years ago. Slope instability has shifted toward higher elevations over time, matching observations made in other studies in the Alps. The driving processes are mainly permafrost thaw and frost cracking, where a more frequent thawing and freezing of slope surfaces increases the fractures in the rock until parts of the rock fall. The important role of these processes was also clear from the high number of rockfalls in response to extremely high temperatures registered in spring 2007. According to the authors, the frequency of rockfalls has increased since the 2000s. The authors also found an increase of the number of debris flows triggered by rainfall events since 2010, most likely due to warmer and wetter summers.

The authors stress that authorities should be aware of these increasing risks, as events triggered at high elevations may promote hazardous cascading effects reaching lower elevations.