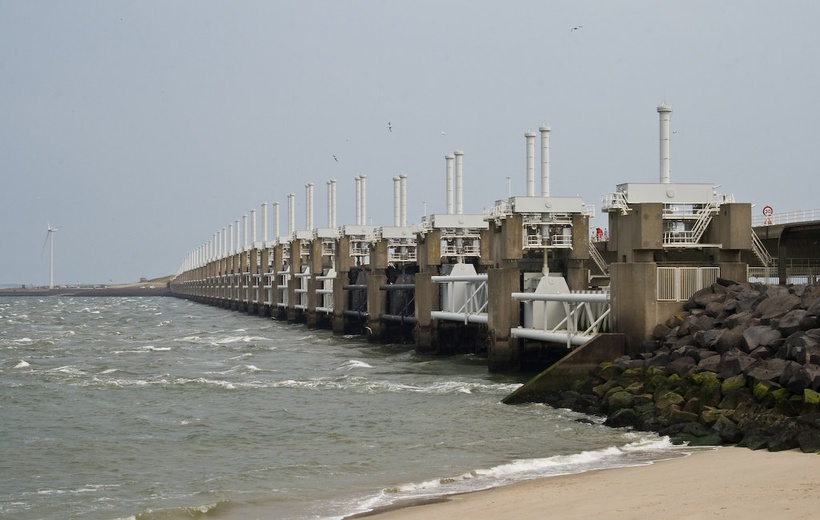 Storm surge barrier in the Netherlands. The Netherlands is a particular case. Of all European coastal countries, the benefits to costs ratio of further improving flood protection this century are highest for the Netherlands, even though the country is already very well protected and flood events are rare (photo: Simon S., www.flickr.com).

The increase of extreme sea levels not only reflects sea level rise but a change in storm conditions as well. Along Europe’s coastlines extreme sea levels with a return period of 100 years are projected to rise by as much as one metre or more by the end of this century due to climate change. Needless to say that this poses significant challenges to protect coastal communities. At present, more than 200 million European citizens live within 50 km from the coastline.

The choice to adapt

No doubt the coastal countries of Europe will adapt to these changing conditions. Adaptation strategies they can choose from are: retreat, accommodate and protect. Retreat means relocating dwellings and infrastructure out of harm’s way. Accommodate includes early warning systems, emergency response, and flood proofing of structures. Protect refers to flood protection through natural (dunes) or artificial (dykes) structures, beach nourishment, and nature-based solutions.

For flood protection by improving dykes, costs and benefits have been evaluated of applying additional protection through dyke improvements along the European coastline in response to the increasing extreme sea levels. This was done for 2100 compared with the current situation, for both a moderate and high-end scenario of climate change.

The cost of doing nothing

At present, average annual coastal flood losses in Europe amount to €1.4 billion (in 2015 € values). Without further improvements of flood protection this number would increase to €210 billion (range: €30 billion to €845 billion) by the end of the century for the moderate scenario of climate change. Annual coastal flood losses would be up to €1268 billion (range: €161 billion to €4731 billion) for the high-end scenario. The increase of coastal flood risk will affect all coastal countries of Europe, with highest numbers for France, the UK, Italy and Denmark. For the high-end scenario this increase could amount to a considerable share of a country’s GDP, most notable in Cyprus (4.9%), Greece (3.2%), Denmark (2.5%), Ireland (1.8%) and Croatia (1.8%).

This scenario of ‘doing nothing’ is not realistic, however, because it pays off for countries to improve their flood protection along parts of the coastline with high value conurbations. Under the assumption that countries do invest in flood protection as long as benefits of extra flood protection exceed the costs of damage due to flooding, the expected annual damage by 2100 will only reach €9 and €24 billion under the moderate and high-end scenario of climate change, respectively. This is a 96%-98% reduction compared to a do-nothing scenario. These investments in elevating dykes are economically efficient along 24%-32% of Europe’s coastline.

The Netherlands is a particular case

At country level, Belgium is the country with the highest percentage of coastline where benefits exceed costs, followed by France and Italy. The benefit to cost ratio is also very high for the Netherlands, Cyprus, Ireland and Greece. This ratio is relatively low for Malta, Bulgaria, Lithuania, Latvia and Croatia. The Netherlands is a particular case, being already very well protected (up to ~10,000 year return period) and still having the highest benefit to cost ratio in Europe. Thus, the benefits from protecting the Netherlands further are high, even though flood events are rare.

The results of this study agree with the latest IPCC report on the Ocean and the Cryosphere, which reports that coastal protection can reduce the expected annual damage in 2100 by 2 to 3 orders of magnitude.