Phytoplankton blooms on lakes are increasing since the 1980s 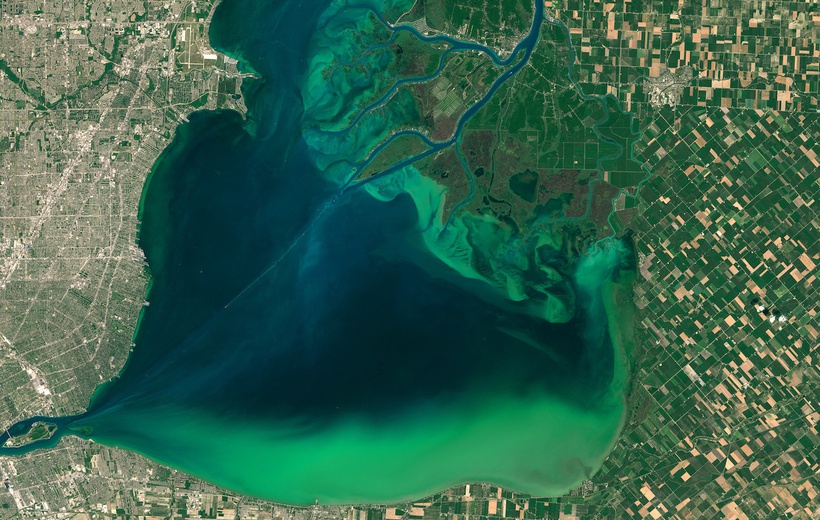 Satellite image of algal blooms around the US Great Lakes in the summer of 2015 (Photo: NASA Earth Observatory, www. Flickr.com)

Blooms of phytoplankton in freshwater lakes harm aquatic food production, recreation and tourism, and drinking-water supplies. In the United States alone, this leads to economic losses of more than US $4 billion annually. Two main drivers of these blooms are nutrient loads and lake warming due to climate change. Management efforts to reduce phytoplankton blooms by reducing nutrient loads may be counteracted by higher temperatures that favor these blooms.

Long-term trends in intense summertime near-surface phytoplankton blooms have been studied for 71 large lakes globally, all with surface areas of more than 100 km2. Landsat 5 satellite imagery was studied for this, covering the period from 1984 to 2012. The results reveal a global exacerbation of phytoplankton blooms. Peak summertime bloom intensity has increased in 68% of these lakes; the increase is statistically significant for close to a third of all lakes. A significant decrease was found for only 8% of these lakes.

Whether this general increase in phytoplankton bloom intensity is due to lake warming as a result of climate change is not clear. The authors do not have a clear explanation of the observed changes. There is no consistent link with water temperature, trends in fertilizer-use, or other relevant drivers. They did find, however, that lakes with a decrease in bloom intensity warmed less compared to other lakes. The latter suggests that lake warming may already be counteracting management efforts to reduce phytoplankton blooms by reducing nutrient loads.