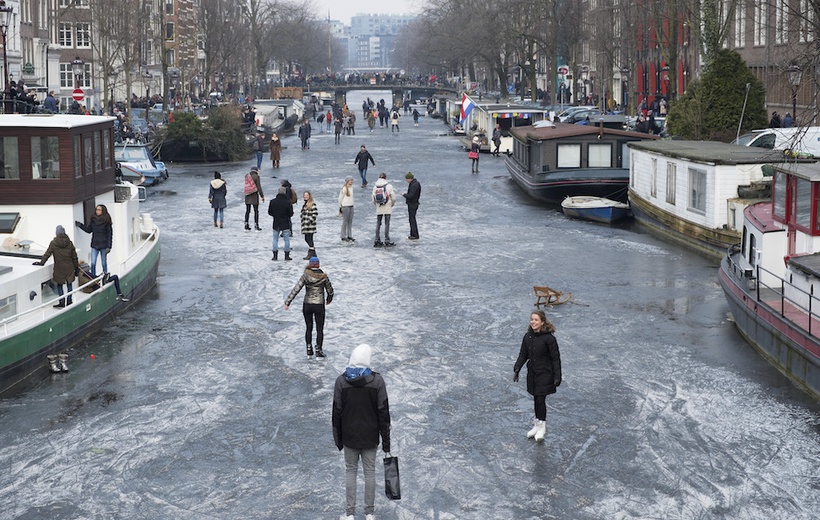 Ice skating on the canals of Amsterdam. More and more often the Dutch have to skip a winter: no ice! (photo: Kitty Terwolbeck, www.flickr.com)

On average, across Europe, the number of days with extreme heat and heat stress has more than tripled from 1950 to 2018: from less than 2 days to more than 6 days per year. This was concluded from observations during the period 1950-2018 at weather stations all across Europe. In this study, a day is extremely hot when its maximum daytime temperature exceeds the limit of the 1% hottest days over the whole period 1950-2018.

In addition to an increase in the number of extremely hot days, heat intensity on a hot day has increased as well. Across Europe, extremely hot days are now about 2.3 °C warmer than in 1950. This is an increase of 0.33 °C per decade, larger than the average global warming of about 0.2 °C per decade. Especially in Central Europe hot days are now much hotter than half a century ago: hot extremes have warmed about 50% more than the corresponding summer mean temperatures. In the rest of Europe, the trends of temperature increase for hot days and mean summer temperatures are similar.

Likewise, a day is extremely cold when its minimum daytime temperature falls below the limit of the 1% coldest days in 1950-2018. The annual number of extremely cold days and nights has decreased by a factor of 2-3 on average across Europe from 1950 to 2018: from more than 5 around 1950 to around 2 days/year in 2018. Cold extremes are now more than 3 °C warmer than in 1950: an average increase of 0.49 °C per decade. In Central and Northern Europe the warming of cold extremes is substantially higher than the corresponding winter mean warming and about 2.5 times larger than the average global warming.

The authors conclude that the stronger increase of hot and cold extremes compared with average global warming cannot be just the result of the shift in mean temperatures toward a globally warmer climate. The variability of the temperature distribution must have changed as well.