Thawing Arctic permafrost may have unexpected and far-reaching impacts 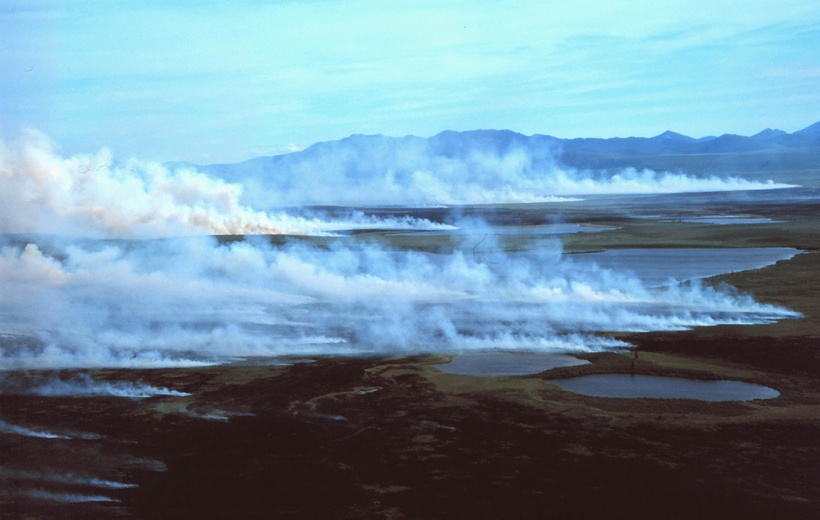 Peat in tundra soils is good fuel for lightning caused wildfires, like this one in Northwest Alaska (photo: Western Arctic National Parkland, www.flickr.com)

The pan-Arctic permafrost region covers large parts of Alaska, Canada, Europe and Russia. This region is expected to warm at least at twice the global average during this century. As a result, the near-surface permafrost will probably degrade extensively. This will have detrimental effects on northern communities, ecosystems and engineering systems. Some of these effects may come as a surprise to you. Who would have thought that thawing permafrost may increase lightning frequency during thunderstorms?

The impacts of thawing permafrost in the Arctic have been inventoried in a recent article in the journal Nature Climate Change. Focal point in these impacts is the decrease of soil moisture when permafrost degrades. From climate model simulations the authors conclude that this decrease will not occur gradually, as is thought so far, but abruptly (within a few months). This rapid change induces a number of unexpected changes in the Arctic, they conclude.

When permafrost starts to thaw, the water cannot penetrate deeper into the soil. The deeper permafrost acts as an impermeable barrier to soil water movement and the available liquid water (from precipitation and/or snowmelt) strongly influences soil moisture content close to the surface. Things may change rapidly when permafrost degradation penetrates deeper into the soil. Additional hydraulic pathways might become available as permafrost degrades, increasing drainage and rapidly reducing surface soil moisture. As a result, soil conditions rapidly become much drier.

A wide range of effects

This abrupt decrease in soil water availability will probably disrupt Northern ecosystems and impact high-latitude carbon emissions. In addition, these abrupt changes will modify the bearing capacity of the soil and foundation characteristics, leading to potentially catastrophic situations for infrastructure. Given the abruptness of this change and that it is expected to occur with little or no warning, adaptation measures would need to be made very quickly to minimize impact.

River flows in northern regions are generally dominated by snowmelt during spring. When permafrost thaws to a greater depth, the melt water infiltrates deeper into the soil and is released more gradually from the soil into the rivers. As a result, the magnitude of the spring streamflow peak will decrease and flood risk in spring will decrease. During the warm season, streamflow will be higher, however, due to the gradual release of snowmelt water from soils, and the risk of flooding due to heavy rainfall events will probably increase.

Drier soils heat up faster in the summer. This results in increased convective (thunderstorm) precipitation during the summer months, and an increase in lightning frequency. In sparsely populated regions, such as the Arctic, cloud-to-ground lightning is the process responsible for the ignition of most wildfires, which are a major concern for the safety of northern communities and infrastructure. More ignition events further endanger northern ecosystems and development. Besides, the abrupt decrease in soil moisture when permafrost thaw reaches deeper soil layers has a strong influence on the combustibility of fuels. In combination, these changes are projected to abruptly and substantially increase the severity of wildfires, the authors state.

According to the authors, their study highlights the importance of going beyond mean projected changes and smooth trends when making decisions on climate change adaptation, given the potential of abrupt climatic shifts occurring throughout this century.