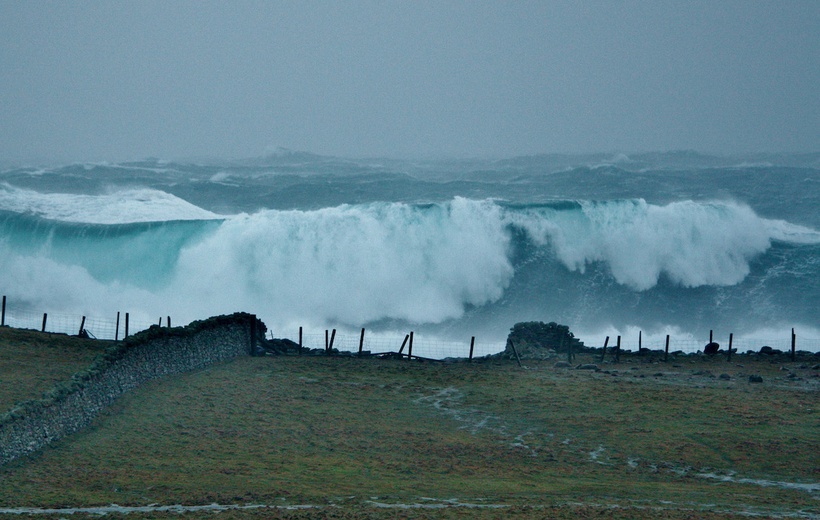 It’s not just sea-level rise that changes Europe’s coastal flood risk. It’s a lot more complicated. Flood hazard depends on the probability of extreme sea levels, and these are the combination of changes in sea level, tides, storm surges and waves. Flood risk is the combination of the probability and the potential consequences of flood hazard. Future changes in the consequences depend on changes in demographic growth, migration to coastal zones and economic development. The change of Europe’s coastal flood risk in future decades is a puzzle of which sea-level rise is just one of the contributing pieces. A study recently presented in Nature Climate Change presented this puzzle.

The pieces of the puzzle

In addition to sea-level rise, the other components that determine extreme sea levels are also changing due to climate change. Europe has a coastline of over 100,000 km, with coastal zones that are densely populated and pivotal for its economy. Hence, also socioeconomic developments control flood risk. In fact, socioeconomic drivers are mainly responsible for the increasing flood losses to date.

In this recent study, high-resolution projections of all these extreme sea-level components, based on a moderate and high-end scenario of climate change, were combined with projections of gross domestic production (GDP), population and exposed assets. Flood damage not only depends on inundation depth but also on the local value of investments; therefore, region-specific depth-damage relations were linked to land use. Updated information on the level of coastal protection was used. No upgrade of these protection standards was assumed in the calculations.

Flood risk can be expressed in economic damage and in number of casualties. For economic damage, the combination of flood probability and flood damage results in the quantity ‘expected annual damage’. Likewise, the combination of probability and number of people exposed to flooding results in the quantity ‘expected annual number of people exposed’.

Expected annual damage from coastal flooding is currently around 0.01% of GDP for Europe, compared to nearly 0.04% (approximately €6 billion per year) for river flooding. This share is projected to grow in the coming decades to range between 0.29 and 0.86% of GDP by the end of this century for the scenarios considered, which is far larger than the share of future river flood risk to GDP in high-income countries. This implies that if flood protection standards are not upgraded along Europe’s coasts and rivers, the total flood risk in Europe will increasingly be dominated by coastal flood hazards from the mid-century onwards. At a country scale, relative economic impacts can be even more pronounced (up to 5% of a country’s GDP by 2100), with the highest burden relative to its economy projected for Cyprus, Norway, Ireland and Denmark.

There is a wide uncertainty around these central estimates due to, for instance, different ice-sheet scenarios and the spread in outcomes of different models. In fact, a worst-case scenario cannot be excluded where total European coastal flood damage could annually exceed €2.5 trillion and six million people could be exposed to coastal flooding each year by the end of the century.

The results of this study show that the intensification of extreme sea levels with global warming is the main driver of the strong rise in Europe’s coastal flood risk.

In time, the footprint of socioeconomic change on future coastal flood risk becomes less important. This is particularly the case for Estonia, Greece, Lithuania and Latvia, where the negative socioeconomic outlook strengthens the contribution of coastal hazards. Minor contributions from socioeconomic growth are also projected for Bulgaria, Germany, Denmark, Malta, the Netherlands and Norway. On the other hand, socioeconomic growth is mainly responsible for the rise in economic losses in Portugal, Romania and Slovenia, but also in Finland, Poland and Sweden. For the latter three countries, this is due to the ongoing land uplift at the Baltic Sea that moderates the contribution of sea-level rise and results in a weaker physical footprint in future damages.

In this study, flood protection standards were not upgraded in time. Adaptation, however, is already ongoing in several European countries, and others will follow. Hence, future coastal flood risk will probably be lower than the estimates presented above.

It is to be expected that flood protection standards will be upgraded. If European countries wish to keep coastal flood risk constant relative to the size of their economy by 2050, protection measures will need to resist extreme sea levels that, on average over Europe, are about half a metre higher. This further climbs to one metre or more, depending on the scenario, towards the end of the century. According to this study, the required increase in protection level may reach two metres or more in some low-lying coastal stretches, for example along the coasts of Belgium, Germany, Portugal and the Netherlands.