For ice-free summers in the Arctic 1.5 or 2 °C global warming makes a huge difference 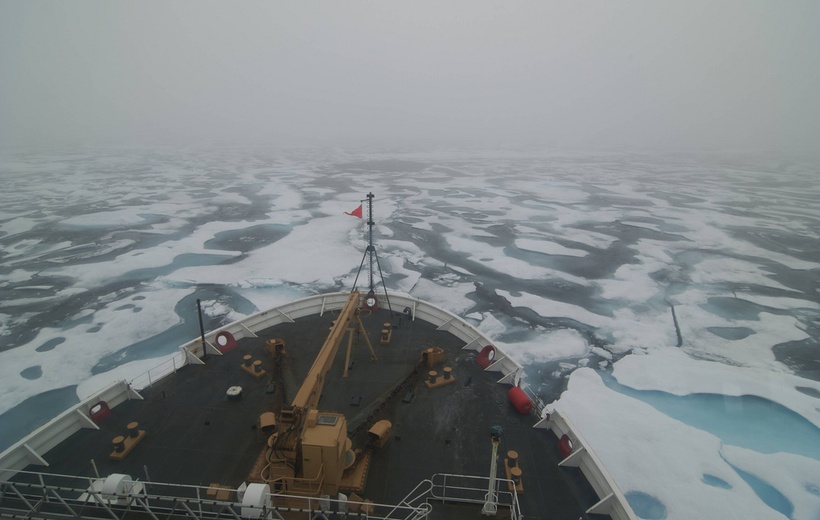 Due to the reduction in summer sea ice, the Arctic Ocean can be used as a shortcut between Pacific and Atlantic ports for increasing (summer) periods in future decades (photo: Ash, www.flickr.com).

The Arctic summer sea-ice cover normally reaches its annual lowest extent in September. The lowest sea ice extent so far was reached in September 2012. It is to be expected that situations with a similar low or lower sea-ice cover will become more likely this century. This will have consequences for ecology and landscapes, for economics, and for climate change itself.

Marine mammals, such as polar bears, will suffer from the loss of summer sea ice, and the Arctic coast will be subject to coastal erosion. Due to the reduction in summer sea ice, the Arctic Ocean can be used as a shortcut between Pacific and Atlantic ports for increasing (summer) periods in future decades. Less sea ice will increase global warming because the darker surface of the water will absorb more heat. Needless to say that projections of future summer sea ice extent are highly relevant for many interests.

The recent Paris Agreement has inspired many scientists to study the differences in impacts between 1.5 °C and 2.0 °C global warming (above pre-industrial conditions). One of these studies focused on the impact on summer Arctic sea ice extent.

This model study showed a huge impact of limiting warming to 1.5 °C compared with 2.0 °C warming, or more. If warming is limited to 1.5 °C, sea ice cover in September will be less than the record 2012 minimum only 55% of the time in the late twenty-first century. At 2.0 °C this will be the case in almost all September months. The likelihood of any September to be completely ice-free under a 2.0 °C scenario is 35% by 2100, according to this study. If warming is limited to 1.5 °C, this likelihood is only a few percent. Besides, under scenarios that reach or exceed 2.0 °C, ice-free conditions for multiple summer months and for several years in a row also become possible by the late twenty-first century.

Still, even when warming is limited to 1.5 °C, the Arctic summer sea-ice cover experiences significant reductions compared to today's cover. Nevertheless, to limit warming to 1.5 °C rather than 2.0°C or more has the potential to avoid frequent ice-free conditions as well as to prevent a loss of multiyear sea ice in the Arctic.