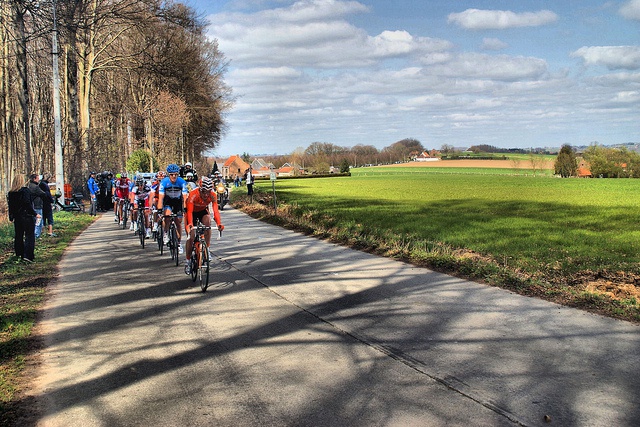 The Tour of Flanders. For some climate scientists the trees along the roads are more interesting than the guys on the pedals (photo: Joop van Dijk, www.flickr.com).

As a result of climate change, cyclic life-history events of plants such as leafing and flowering occur earlier in spring. Reliable long-term monitoring data to quantify this advancement is scarce, however. Luckily, there is cycling.

Archived television video footage of a number of professional cycling races cover long time series of the same roads year after year at the same time in spring. Leafing and flowering of plant individuals that feature annually in the video footage on these locations can be studied. The potential of this method has been demonstrated for the Tour of Flanders, one of the most famous professional road cycling races worldwide, held every spring around early April.

The timing of leaf-out and flowering of 46 individual trees and shrubs growing along the route of the Tour of Flanders in Belgium was quantified from almost four decades of video footage of this race (recorded from 1981 to 2016). The changes in timing were related to temperature and precipitation metrics for this video time series. Average temperature in the area has increased by about 1.5°C since 1980. Surprisingly strong shifts in the phenology of leaf-out and flowering of trees were detected in the historical video footage over four decades, as a result of this warming.

Trees almost never had flushed at the time of the spring race in the 1980s while significantly more individuals had flushed in the video footage between 2006 and 2016. The advancement of leaf-out and flowering was up to 5 days. These shifts were related to temperatures in the preceding months.