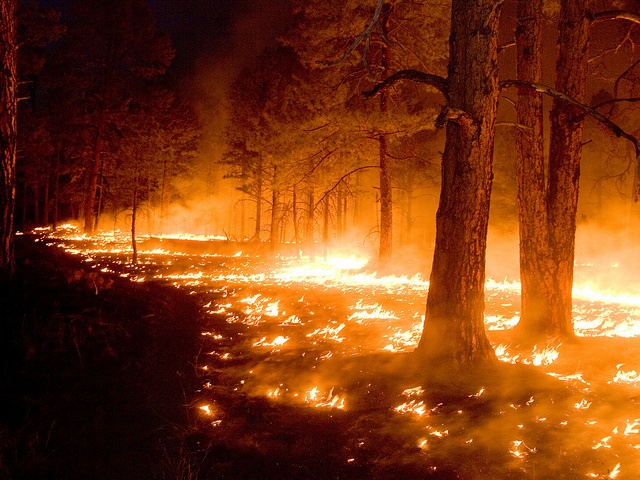 During the summers of 2003 and 2016 large parts of Europe suffered from extreme wildfire events. Experts questioned how changing drought conditions might affect the activity of these types of fires. For Mediterranean France, for instance, several fires became particularly large and devastating during these summers despite growing efforts in fire management and suppression capacities implemented since the beginning of the 1990s.

Looking for answers, scientists analyzed the weather conditions associated with these extreme wildfires. They concluded that extreme wildfire events result from specific interactions between different types of drought and different types of weather conditions. Two types of droughts are particularly responsible for these extreme events: the so-called “press droughts” and “hot droughts”.

In contrast, “pulse droughts” (or “flash droughts”) only last days to weeks but are extreme in magnitude. The impact of a pulse drought on a long lasting press drought may intensify the conditions into a “hot drought”. This happened in 2003 when a long lasting drought and a summer heat wave combined.

It is generally accepted that a warmer and drier climate will alter the frequency, intensity or severity of wildfires. The analysis of the circumstances leading to the extreme wildfires of 2003 and 2016 illustrated two major shifts in meteorological conditions.

The first shift is the way that wind-driven wildfires are modified by press droughts, as illustrated by the 2016 fire season. Clearly, long lasting and intense droughts can substantially desiccate the living vegetation, thus increasing the impact of wind-driven fires, and therefore increasing fire intensity and rate of spread, and reducing suppression opportunities.

The second shift is the way that a heat wave adds to a long lasting drought, like in the summer of 2003, thus increasing the vulnerability to extreme wildfires even in the absence of strong winds. Probably, these conditions lead to the fast desiccation of plants during hot droughts, thus increasing fire intensity that may overwhelm fire suppression policies.

These types of extreme wildfire events reflect the expected impacts of climate change on droughts in the Mediterranean and in other regions of the world. “Hot droughts” and “press droughts” can lead to fire weather conditions that have not been explored before and to a subsequent increased frequency of extreme wildfire events. The dryness of fuel is pivotal in the occurrence of these events. The authors question whether some possible changes in fire management could compensate for increasing droughts and its impact on wildfire behavior.