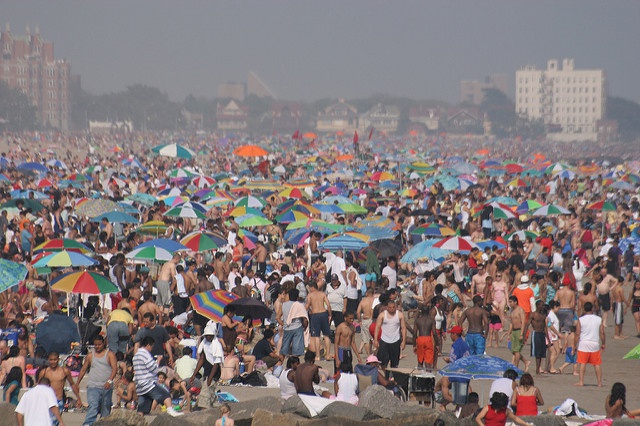 The Paris agreement of 2015

According to the Paris agreement of 2015, global warming should be kept below 2 °C above pre-industrial levels, and preferably be limited to 1.5 °C. What if we do succeed in reaching these goals, what would future heat waves look like? This was studied with a very high-resolution global model. It turns out that it makes a huge difference whether global warming is kept at 2 °C or 1.5 °C.

The model results were used to calculate an index for wave magnitude that takes into account both heat wave duration and intensity. The higher this index, the more extreme the heat wave. Three types of heat waves were distinguished: severe, extreme and exceptional heat waves. These heat wave types more or less agree with the heat waves of the Balkans (2007), France (2003) and Russia (2010), respectively. All of these heat waves have led to increased mortality.

Even at 1.5 °C global warming, a significant increase in heat wave magnitude is expected over Africa, South America, and Southeast Asia. Deadly heat-related climatic conditions are expected to increase over most of the tropical developing countries. Heat waves will become both more intense and more frequent. One should realize that we have already reached almost two thirds of this 1.5 °C global warming by now.

Exceptional heat waves, with magnitude similar or higher than that of Russia 2010, are expected to occur especially over regions particularly vulnerable to climate change, such as Algeria, the Horn of Africa and the Arabian Gulf. These regions have been identified as hotspots for critical future human habitability because of extreme temperatures. In fact, exceptional heat waves will occur in some areas where these heat waves do not occur under 1.5 °C warming. In particular, 10% of the land over East Africa and Southeast Asia will be affected by exceptional heat waves at least once every 20 years.

At 1.5 °C global warming, 14% of the world population will be exposed to severe heat waves at least once every 5 years, and around half of the world population at least once every 20 years. These fractions strongly increase to 37% (every 5 years) and 71% (every 20 years), respectively, when global warming rises from 1.5 °C to 2 °C.

The number of people exposed to extreme heat waves every 20 years will increase from 9% to 28% when global warming increases from 1.5 °C to 2 °C, corresponding to an increase of around 1.4 billion people.

At 2 °C global warming, 8% of the world population may be hit by exceptional heat waves at least once every 50 years. This corresponds to around 452 million people more than in a 1.5 °C world. These people are mainly located in developing countries such as the Horn of Africa, the area of the Gulf of Guinea, Indonesia and the coastal regions of South-America from Venezuela to Brazil.

This study shows that implementing ambitious mitigation strategies to limit warming below 2 °C or even to 1.5 °C will drastically reduce exposure to the most severe impact of temperature related extreme events in terms of intensity and frequency of extreme heat waves. What’s more, it will drastically reduce the probability of occurrence of exceptional heat waves, with magnitude similar or higher than that occurred in Russia 2010.

The authors of this study are not that optimistic about reaching the goals of the Paris agreement, however. With the current trend in greenhouse gases emissions, they state, even the 2 °C target is too optimistic. In this case, they conclude, their study is useful to identify regions where adaptation options are most strongly and urgently needed.