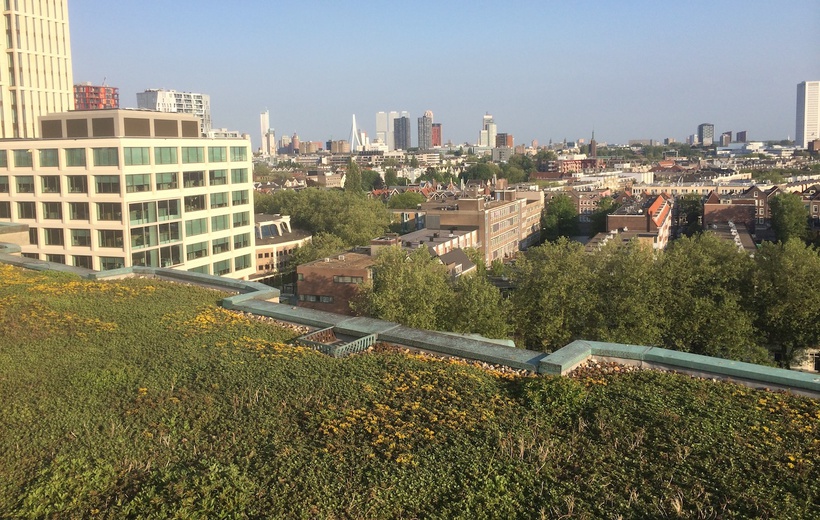 Photo: Green roof in the city centre of Rotterdam, the Netherlands

Urbanization modifies the hydrologic cycle. Rainfall rapidly runs off the impervious surfaces of buildings and roads, and concentrates in the drainage network. When it rains hard, and long, peak flows in the drainage network may be exceeded and surface flooding results. In most parts of the urbanized world, stormwater runoff increases for two reasons. First, due to the ongoing urbanization that changes pervious into impervious surfaces. Second, because global warming increases the intensity of extreme rainfall events. A logic response may be to increase the discharge capacity of drainage networks. This is very expensive, however, and municipalities are trying to avoid this. They are seeking for other options to cope with more extreme rainfall events. One of these options is implementing green roofs.

Whether green roofs are a good alternative to adapt to more extreme rainfall events depends on their performance in stormwater runoff mitigation. This performance has been evaluated for a municipality in Milan, in northern Italy, a city with a combined system, designed to collect both sewage and urban stormwater during rainfall events. The current stormwater infrastructure of this municipality is undersized or non-existent, a situation common in many municipalities globally. For this performance evaluation, the impact of both spatially homogeneous and heterogeneous installations of green roofs was studied. In the latter case, green roofs were concentrated where the drainage network is more prone to high degrees of filling. Calculations were made for different combinations of rainfall intensity and duration.

The results show that implementing green roofs can be a valuable strategy to reduce stormwater runoff to the urban drainage networks, both in terms of flow peak and volume. The larger the roof area that is covered with green roofs, the larger the mitigating impact. Also, the impact is larger when green roofs are concentrated near parts of the drainage network that are more prone to high degree of filling. Thus, spatially heterogeneous installations of green roofs may be a more tailor-made solution than homogeneous installations.

But not for the most extreme events

There is a downside, however. The green roof strategy seems to be most effective for frequent storms of smaller magnitude. For infrequent storms of larger magnitude, green roofs alone are not sufficient to significantly reduce stormwater discharge. For these extreme events, stormwater discharge capacity of urban areas is determined by the characteristics of the sewer infrastructure. It will be necessary to include structural measures such as sewer relining, enlargement of the diameters, or simplifying network layout to cope with these extreme situations as well.